Runnin’ Utes Staunch Defense Propels Them To Win Over Stanford 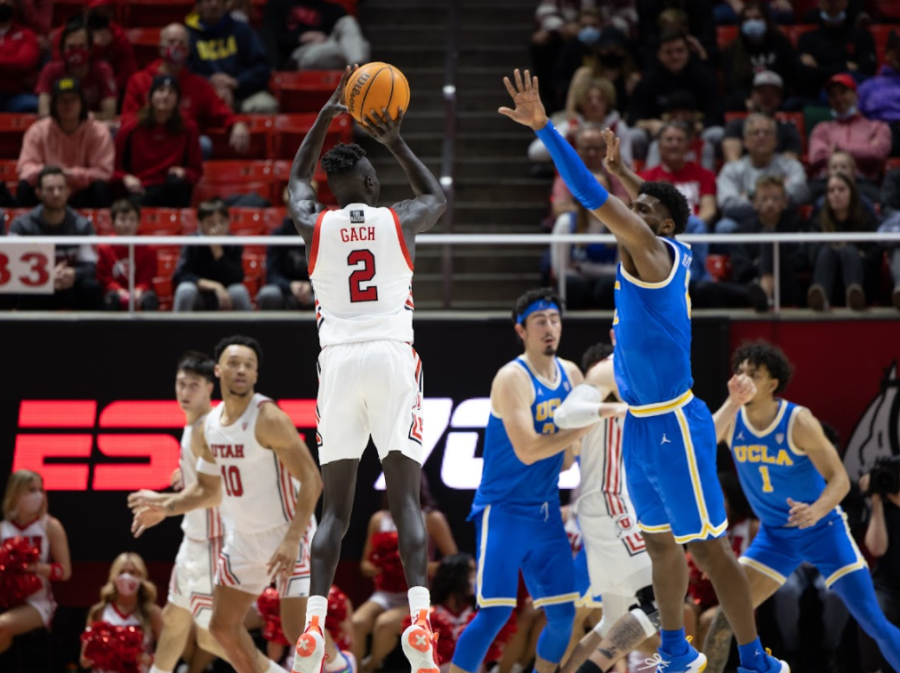 Utah basketball's Both Gach (#2) in the matchup against the UCLA Bruins at the Jon M. Huntsman Center in Salt Lake City on Thursday, Jan. 20, 2022. (Photo by Jack Gambassi | The Daily Utah Chronicle)

The University of Utah men’s basketball team was able to upset the Stanford Cardinal on their home floor late Thursday night. Utah made a comeback after being down as many as nine in the second half.

Utah kept the game within reach all night, never falling behind by double digits. Still, they trailed most of the night, waiting until the very end of the game to make their move and take the lead, earning a hard-fought victory.

Stanford hit two free throws to put their lead at 53-45 with 7:30 to go. From that point, they only scored three points the rest of the night, two of those coming with just 15 seconds to go, with the game already decided. Utah’s defense showed up in the biggest moments with multiple big plays by everyone on the court, bottling up the Cardinal and allowing the offense to pull the Utes ahead.

It was a 15-3 scoring run over the final 7:15 to give Utah the win. Utah found contributions from multiple starters down the stretch. Gabe Madsen broke a 54-54 tie with a huge stepback three-pointer in the defender’s face. Marco Anthony came up with multiple rebounds down the stretch, while Both Gach got to the rim for two layups and two free throws.

This was a recipe for how Utah needs to win this season. They played good defense, shot the ball well enough, and had a balanced scoring attack without relying on anyone too much. There were four players in double figures to go with 12 rebounds from Anthony and three three-pointers on three attempts from Madsen.

This victory is Utah’s third Pac-12 win of the season with just four regular season games to go. They will visit Cal on Saturday, a team they beat earlier this season back on December 5th. Utah has a chance for their first winning streak since late November, when they began the season 5-0.