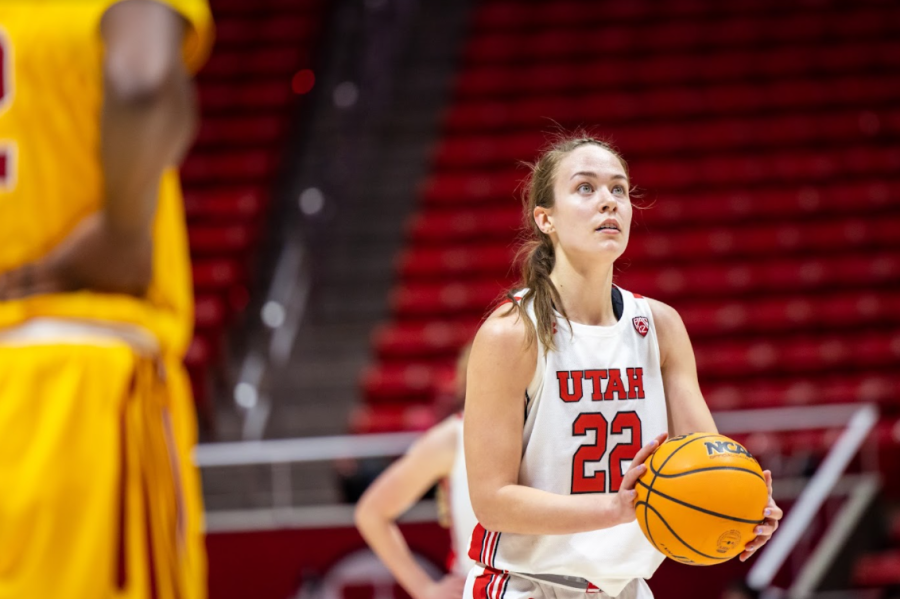 After a disappointing loss to USC on Friday night, the University of Utah women’s basketball team rebounded in a big way with a win 75-70 against UCLA at Pauley Pavilion.

The win moves Utah to 7-6 in conference play and into the top six of Pac-12 teams as the Utes continue to battle forward, trying to secure an at large bid in the March Madness tournament in 2022.

Head coach Lynne Roberts was not pleased with her team’s performance on Friday night; she did not mince words after the game.

“This was just a really, really bad night for us,” Roberts said. “Offensively we were really out of sync, and I have to credit USC’s defense. That said, we were simply really poor offensively for the first time this season. Poor tempo, soft attacks and way too many turnovers. I take full responsibility for how we played, and I’m certain that this team will regroup and come out better on Sunday.”

The Utes did respond positively on Sunday after the challenge from their coach. Jenna Johnson returned to the lineup over the weekend and was a key part of Utah’s success against UCLA on Sunday.

The Utes shot a tremendous 21-28 from the free-throw line as the Bruins kept it close down the stretch against the Utes, forcing it to a 4-point game at one point, but Utah held on and prevailed with the victory.

With scoring numbers like that it’s hard to imagine the Utes losing this game. The leading scorers for the year stepped up in the biggest spot and provided a crucial shooting day in the second half after a slow first half to give the Utes a huge win.
First Half
The Utes ended the first half down 35-27. UCLA pulling away in the final five minutes of the first half tells a misleading story. This game was tight early on, with both teams running the floor extremely well.

The Utes shooting in the first half left something to be desired though as for the second straight game the shots that were falling against Washington State and Colorado earlier in the year were not going down for the Utes in the first half of this game.

The Utes shot 9-34 from the field in the first half; that’s only 26%. Meanwhile, only 5-19 threes went down for the Utes. It seemed as if in the first half some bad shooting luck had caught up with the Utes for the first time in the month of February.

However, numbers were not as positive on the boards where Utah gave up five offensive rebounds and was outrebounded 23-15 in the first frame of play.

The Utes also had problems switching onto UCLA power forward Iimar’i Thomas. Thomas stepped outside the arc and drained nine points from beyond the arc in an 11 point half, going 3-3 from deep.

The lack of defensive rotation towards Thomas was the most major defensive flaw of the first half for the Utes.

Down the final five minutes of the half, the Utes faced stagnation in their half court offense that allowed for the Bruins to take a commanding lead into the third quarter.
Second Half
The Utes came out and shot well in the third quarter. Utah went 7-13 from the field in the third segment of play and Brynna Maxwell hitting back to back threes totally shifted the momentum of the game and gives the Utes the lead.

After establishing an eight-point lead, despite fighting back UCLA never caught back up.

The Utes shooting numbers in the half finished an impressive 13-23 while they also posted 5-10 from three point range.

The vastly improved numbers marked the number one difference between Friday’s loss to USC and an impressive win to close off the weekend at UCLA.

Up next the Utes close out the season against Oregon State and Oregon at home this weekend. Oregon State will come to town Thursday and Oregon will be in the building on Saturday, before the Utes head to the Pac-12 tournament on March 2nd.