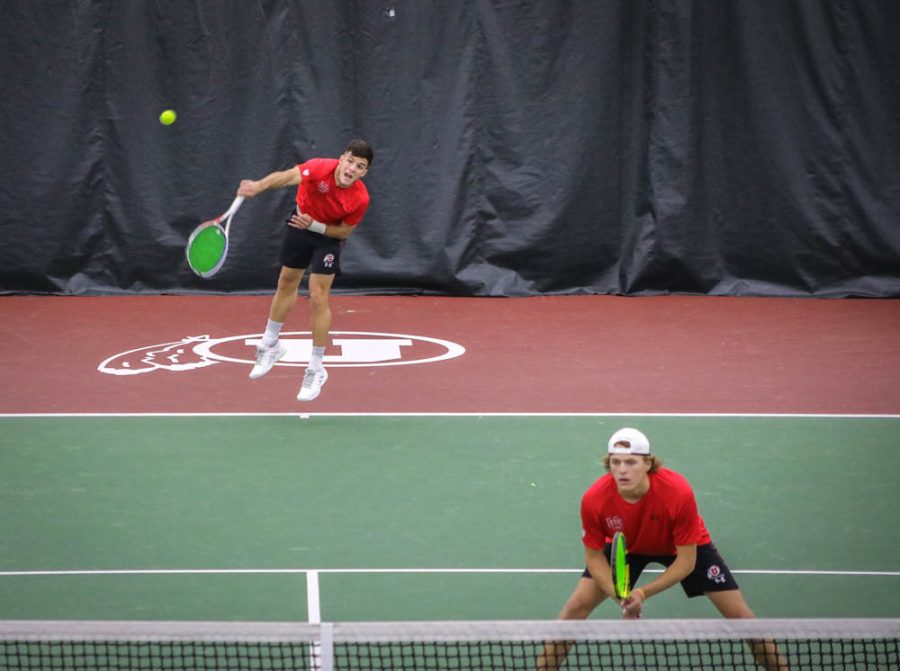 The University of Utah women’s tennis team had two Pac-12 affairs this weekend as they faced USC and UCLA, while the men’s tennis team absolutely dominated their way to 16-0 this weekend as they went up against San Diego State and UC San Diego.
Utah Women vs. USC
The Utah women faced No. 21 USC at home on March 4 at 1:30 p.m. The matchday started with doubles as Utah’s Linda Huang and Madison Tattini lost to USC’s Eryn Cayetano and Grace Piper 2-6.

The Lady Utes tied it back up as Lindsay Hung and Madeline Lamoreaux beat USC’s Danielle Willson and Sloane Morra 6-3. Anastasia Goncharova and Emily Dush of Utah faced USC’s Snow Han and Gabrielle Lee and secured a 6-3 victory while also securing the doubles point.

With the doubles point in Utah’s hand, the Utes started singles with a loss, Hung losing to Han 2-6 and 1-6. Utah’s Anya Lamoreaux pulled it back against Willson, winning 6-3 in both sets.

This didn’t last long, however, as USC went ahead, with Goncharova losing her match against Piper 1-6 and 5-7. Hung overcame a crucial tiebreaker to beat Cayetano 7-6(9) and 6-1, tying it up once more.

With a must-win match on her hands, Tattini clutched up when needed most, taking down Morra 7-5 and 6-4, capturing the singles point and the win for Utah. Dush went three sets with USC’s Salma Ewing but the match went unfinished with the game already won. This was Utah’s first win against the Trojans in program history.
Utah Women vs. UCLA
The Utah women were home again as they faced No. 16 UCLA on March 6 at noon. Hung and Lamoreaux lost the first doubles match of the day to UCLA’s Kimmi Hance and Vanessa Ong by a score of 1-6. Dush and Goncharova tied it up, beating UCLA’s Ava Catanzarite and Abbey Forbes 6-1.

With doubles tied up, Huang and Tattini fell to UCLA’s Elysia Bolton and Elise Wagle in a close tiebreaker. The score was 7-6(7).

After losing a close doubles portion, the Lady Utes went into singles looking to bounce back. Goncharova started singles off with a loss against Hance 6-4 in both sets.

The devastating results continued as Tattini faced Wagle and lost her match 6-7(7) and 1-6. UCLA clinched the singles point and the win as Hung went up against UCLA’s Sasha Vagramov and lost 3-6 and 4-6.

With a split win-loss weekend, the No. 27 Utah women moved to 12-2 on the year and look to bounce back once more. The Utes head north next weekend as they take on Washington on Friday, March 11 at 2:30 p.m. (MST) and Washington State on Sunday, March 13 at noon.
Utah Men vs. San Diego State
The No. 23 Utah men faced San Diego State away on Sunday, March 6 at 10 a.m. Starting the day off with doubles, Utah’s Francisco Bastias and Bruno Caula beat San Diego State’s Victor Castro and Johannes Seeman 6-4.

Utes Jayson Blando and Mathias Gavelin secured the doubles point, beating Jules Auffray and Judson Blair of San Diego State 6-4. Franco Capalbo and Geronimo Espin of Utah had their match against San Diego State’s Joe Tyler and Alexander Mandma go unfinished with the doubles point already won. The match was 4-5 before it was called.

The Utah men swept singles as Gavelin beat San Diego State’s Roni Rikkonen 6-0 and 6-3, Bastias faced Seeman and won 6-2 in both sets and Ute Bruno Krenn secured the singles point and the win, beating Blair in a three-set match 2-6, 6-3 and 6-1. Espin, Caula and Capalbo all had their matches go unfinished with the win already secured.
Utah Men vs. UC San Diego
After the earlier win against San Diego State, the Utes faced UC San Diego away on Sunday, March 6 at 3 p.m. Starting on the wrong foot, Gavelin and Blando lost to UC San Diego’s Eric Silberman and Zach Ermert 2-6.

Capalbo and Espin pulled it back equal as they beat Daniel Traxler and Jett Cole of UC San Diego 6-2. With doubles tied, Ute Rian Ta and Caula pulled through and beat Pelayo Rodriguez and Phillip Lan 6-2, and in turn captured the doubles point.

The Utah men yet again swept singles as Caula beat Ermert 6-4 and 6-0, Blando faced Cole winning 7-6 and 6-2 and Capalbo secured the singles point and the win beating Traxler 6-4 in both sets. Espin, Gavelin and Blando all had their matches go unfinished with the win already in hand.

The Utah men can’t be stopped as they move to 16-0 on the season and continue to cruise through the schedule with ease. The Utes will look to further improve upon their perfect record next week where they will stay in California to face Stanford on Friday, March 11 at 3 p.m. and California Sunday, March 13, and Monday, March 14 at 1 p.m.