Utah Softball Can’t Hold On for Series Win Against Oregon 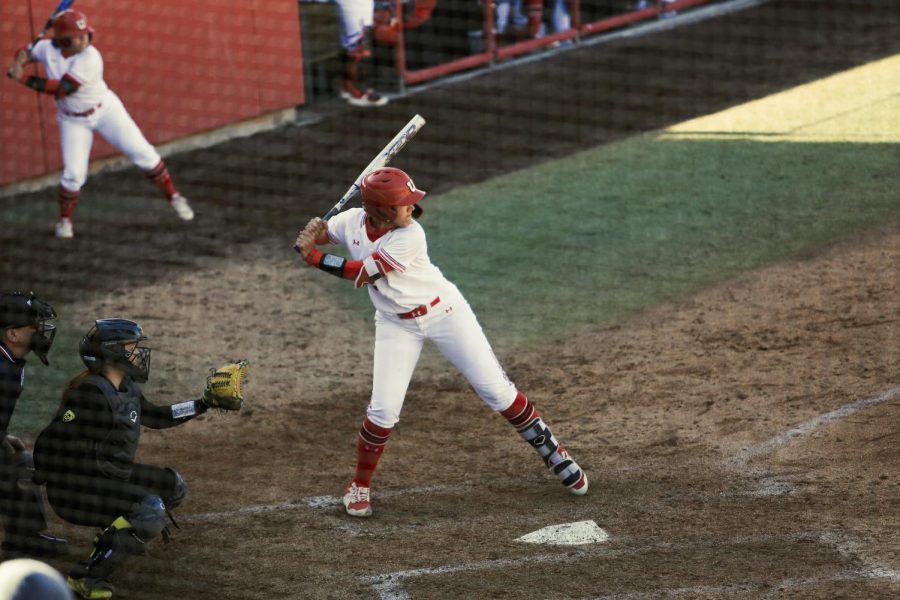 University of Utah versus Oregon at the Dumke Family Softball Stadium in Salt Lake City on Friday, March 18, 2022 (Photo by David Chenoweth | The Daily Utah Chronicle)

The University of Utah softball team (1-2, 16-13) kicked off the 2022 home schedule with an inauspicious start, dropping three straight to the Wisconsin Badgers.

Utah took a 2-1 lead into the seventh inning of the first game of a Tuesday doubleheader, and while the offense hadn’t set the world on fire, it looked as though the Utes might escape with the win.

That was until a three-run Badger seventh put them on track for a 4-3 win. Sydney Sandez faltered after six strong innings and the bats didn’t have enough juice to pick her up, a storyline familiar to this Utah softball team.

9-1 and 6-1 losses followed for the Utes and with the prospect of the No. 12 ranked Oregon Ducks (2-1, 21-4) coming to town over the weekend, it would be understandable if some players hung their heads, if only just a bit.

Rather than letting the losses overwhelm them, coach Amy Hogue had her Utes ready for the Oregon waterfowl invasion.
Oregon Ducks 2 – Utah Utes 5
Shi Smith (3-2) spun her best game as a Ute as she scattered six Oregon hits, allowing just two runs in the process while striking out six. Jordyn Gasper’s two-RBI propelled Utah to their first win against Oregon since May 5, 2019.

Smith’s energy set the tone from the outset, and her contagious enthusiasm was shared across the diamond.

Another strikeout! @ShiSmith22 continues phenomenal outing by recording her sixth K of the game.

After the Badgers limited Utah to just five runs in three games earlier in the week, the bats woke up to the tune of four runs in the opening three frames, giving the Utes a 4-1 lead. Gasper’s two-out, two-RBI single to left brought around Ellessa Bonstrom and pinch-runner MK Gomez.

Haley Denning led off the fifth inning with her first triple of the year, adding an insurance run when Bonstrom sent a sac fly out to left.

Jordan Dail (7-2) took the loss for Oregon. In four innings, Dail was tagged for five runs, four earned on five hits.
Oregon Ducks 8 – Utah Utes 2
Smith started strong in the circle but ran out of gas in the middle innings after pitching around three Ute errors, allowing Oregon to pull away late in the 8-2 win.

.@shismith22 gets the start again in the circle for Game 2!

Utah scored first for the second straight game when in the third inning, Sophie Jacquez lined a single to right that scored Bontrom from second.

The Ducks’ bats woke up in the following half innings as they scored a pair of runs in the top of the fourth. After hitting a batter and giving up a single to Vallery Wong, Smith was pulled in favor of Sydney Sandez. Sandez struck out Ariel Carlson for the second out of the inning and looked as though she may be able to work out of the jam. That was until a Paige Sinicke two-RBI single scored two more and opened up a larger than normal three-run lead due to the Utes’ offensive inconsistency.

Following Katie Faulk’s third home run of the season, the Ducks tacked on some insurance with a run in the sixth and a no-doubt, pinch-hit three-run homer from Allison Benning in the seventh capped the scoring.

Oregon scored first but Utah’s offense exploded to the tune of six runs in the first two innings. Hitting for the cycle as a team in the first, the Utes hung a crooked number on Oregon starter Hansen with four first-inning runs.

After Denning and Bonstrom were retired to begin the inning, Jaquez singled and scored when Julia Jimenez doubled to left-center. Gasper followed Jimenez with her first triple of the season and Destiny White capped the big inning with a two-run bomb to left, her second homer of the season.

MOONSHOT! @deeesss_21 hits her second homerun of the season to cap off a four-run frame for Utah!

In her first start of the weekend, Mariah Lopez gave up a first-inning solo home run and would end up getting pulled in favor of Sandez to begin the third after giving up two more runs in the second.

Fans saw a pitching duel in the middle innings as neither team could scratch across a run four straight frames.

.@alibelarde1 with an incredible diving play👀

Sandez, pitching in relief of Lopez, went into the seventh with the lead and a chance to help Utah to their second series win over Oregon ever and their first since 2019. Unfortunately for Sandez, Oregon finally solved her and would go on to score four runs and take the lead without recording an out. Smith came on for Sandez to get the Utes out of the inning but the damage had been done and the Ducks went on to win 7-6.

After scoring six runs on seven hits in the first two innings, Utah’s offense stagnated over the final five frames, managing just two hits and no runs. After entering the weekend leading the Pac-12 with 57 stolen bases, Utah’s running game was derailed as they only stole one bag all weekend.

Hansen (6-0) got her second win of the weekend in the nightcap while Sandez fell to 6-4 on the season.
On Deck
Utah takes a break from Pac-12 play as they look forward to a two-game series against the Weber State Wildcats. The first game will be played at Dumke Family Softball Stadium on Saturday, March 26. First pitch is scheduled for 3 p.m. MDT. The Utes then head north to Ogden when the same two teams will play at Wildcat Softball Field with the first pitch on Sunday, March 27 scheduled for 1 p.m. MDT.
Follow the Utes
For fans of the Utah softball program, follow the Utes on Twitter (@Utah_Softball), Instagram (@utahsoftball) and Facebook (@utesoftball).