Get To Know Novie McCabe and Her Path to the Olympics 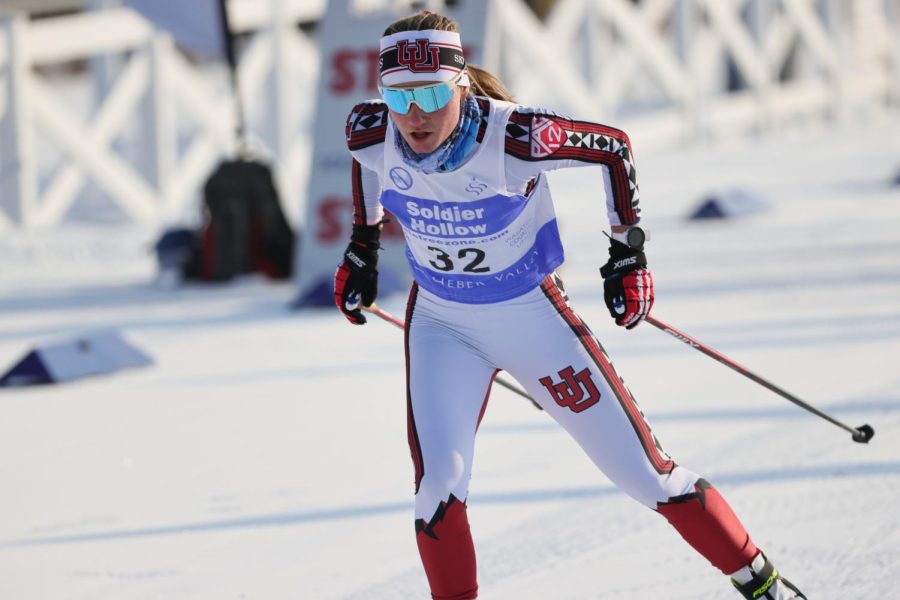 If you watched the Winter Olympics this year, you might have recognized University of Utah athlete Novie McCabe. The Utah sophomore competed in three Cross-Country Skiing Olympic events and was one of twelve Ute skiers competing in Beijing. Although she has proven to be one of the elite athletes of her sport, she still is able to factor time into her studies here at the U and has grown to really love being a part of the campus and community.

Skiing has always been a part of McCabe’s life. Her mother Laura, a Utah alumni, was a cross-country skier as well and participated in two Olympics. The younger McCabe started skiing at a young age and soon found it to be one of her passions as she continued to ski more often.

Growing up in Winthrop, Washington, she had immediate access to the Methow Trails, the largest cross-country skiing area in the country, where she learned and improved her ability to ski. She joined the Methow Valley Nordic Team, which helped her develop into the talented Olympic athlete she is today. McCabe always enjoyed the sense of community that came with skiing.

“Having a great group of friends really kept me excited about competing,” she said. “We grew up racing and traveling together, which definitely helped skiing become more of a passion.”

McCabe started competing more competitively at the young age of fifteen and enjoyed the traveling that came along with it.

“My first international trip was Finland,” McCabe recalled. “I took it as an opportunity to meet new people and to learn more about skiing which definitely kept the sport fun for me.”

McCabe competed for her high school ski team, where she led Liberty Bell High to three straight 2B/1B WIAA State Championships. She also competed in the 2017 U.S. Junior National Championships where she won the 5km freestyle for the U16 group.

Prior to attending the U, McCabe was a member of the 2019-20 U.S. Development Team alongside fellow Ute Sydney Palmer-Ledger, where she competed in the Junior World Ski Championships. She was a part of the 2020 4×3.3km team that placed second — the highest finish by an American U20 quartet since the event was added in 2001. In the 2019 World Junior Championships, she placed 10th in the 15km classic and 29th in the 5km skate, while also competing as a member of the 4×3.3km relay team that took fourth.

While competing at the 2019 U.S. Cross Country Championships, McCabe took second in the junior women’s 10km classic which she followed up with a second-place finish in the 10km freestyle at the Alpen Cup in Switzerland.

She decided to attend the same school as her mom as she enrolled at the U in fall of 2020. Her presence was immediately felt during the 2021 collegiate season. In her first season with the Utes, she landed on the podium in all ten races she participated in, five of which she won.

When asked why she chose to attend the U, McCabe said it was a combination of the great ski program the school has to offer, as well as the coaches.

“I really like the coaches, I like how they support those of us who want to pursue the Olympics and World Cups.”

She also enjoys competing with several athletes on the same skill level as her.

“There are so many fast girls to train with,” she said. “I can always learn a lot from them.”

It didn’t take long for McCabe to develop a love for Salt Lake City, as she quickly became familiar with the city and what it has to offer. Although the city didn’t factor into her choice of school, she is able to recognize it as one of her favorite things about going to the U and already has favorite spots around town including Publik, her favorite coffee shop.

“I like how close we are to the mountains and the general environment Salt Lake has to offer. Being from a small town, it’s fun to have a bit more to do.”

McCabe is continuing to live her Olympic dream and consistently shows out in collegiate events, as she won both her recent races during the 2022 RMISA Championship, a tournament where she helped the Utes come out victorious.

Overall, McCabe is able to recognize the work she put in to become an Olympian and is still continuing to impress Ute Nation.