Linnabary: Powerful Action from Students for the Wasatch 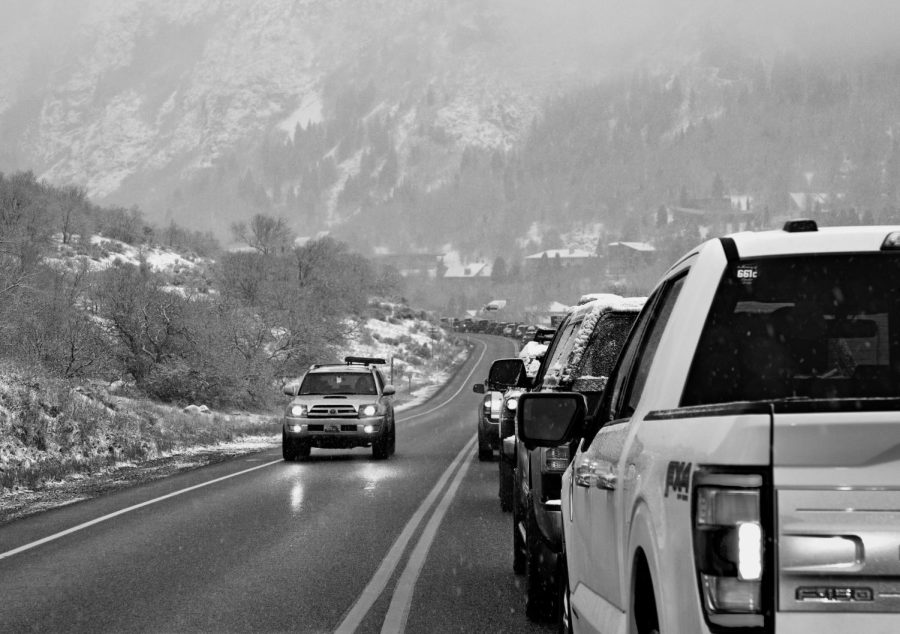 The traffic snake shows itself as skiers and snowboarders try to drive up Little Cottonwood Canyon on a snow day on Friday, Feb. 18, 2022. (Photo by Kevin Cody | The Daily Utah Chronicle)

If you’re reading this, it’s safe to say you live on the Wasatch front, or at least know someone who does. One thing that makes living on the Wasatch front so desirable is its easy access to the outdoors from the many canyons and peaks. One such pathway is Little Cottonwood Canyon. Little Cottonwood is a hub for climbing, hiking, mountain biking and skiing. This popularity has led to an ever-growing traffic issue.

Traffic is most prominent during ski season, especially after snowfall or on “bluebird days.” People driving up the canyon, myself included, can expect to be in traffic for hours. One such solution to this problem is a gondola running up the length of the canyon. This gondola would help reduce traffic by taking cars off the road, but some have taken issue with this solution, such as Students for the Wasatch. Students for the Wasatch is a student group based here at the University of Utah. They are taking student activism to a new level, gaining massive influence and making their voice heard in this conversation.

I had the opportunity to sit down with some of the group’s founding members and ask them about the motivations of Students for the Wasatch. Claudia Wiese, the co-founder and co-president of the group, recalled a day when she was skiing. During that day, she had a conversation with a friend about the proposed gondola and reflected on the “pit in her stomach,” knowing that a gondola would destroy the canyon. She felt a call to action and co-founded Students for the Wasatch. Sydney Smith, another member of the organization, grew up close to the mouth of the canyon and couldn’t bear to see something like the gondola damage the environment.

Stories like this are commonplace in the Students for the Wasatch. This group loves the outdoors, specifically Little Cottonwood. But what makes this group so remarkable is their ability to turn passion into constructive activism. Wiese uses Instagram to advocate on behalf of Little Cottonwood and to build community. Wiese and Smith also mentioned how important it is to give students actionable items. As a fourth-year student, Wiese explained how common it is for a group to fizzle out. To make real change, students must influence the people making the decisions, which in this case are Utah’s lawmakers.

But as college students, free time is hard to come by. That is why Students for the Wasatch has made complex processes simple through step-by-step action items. Instead of telling students to write their lawmakers, they handed students all the information and materials for writing such a letter. This made the process simple and allowed Students for the Wasatch to send in numerous letters.

Ultimately, Students for the Wasatch would like to see an improved electrical bus system used to shuttle people from all over the Wasatch front to locations within Little Cottonwood. Smith said this improved bus system would be more fiscally responsible, safer, better for the environment and canyon landscape and more accessible to the public than the gondola.

At times, student voices can feel small, especially when change is a slow process, but Weise pointed out that acting now is better than not trying at all. Even if a gondola is installed, she doesn’t want to have to look at it and feel as though she did nothing to try and stop it. Smith said the upwelling of concern from the community gives her hope. The effective activism of Student for the Wasatch has caught the ears of lawmakers, both Republican and Democrat, and the operators of the major ski resorts. They feel as though young people and college students have a seat at the table.

Wiese said being involved in campus activism can be confusing and hard to navigate and that sometimes you can get “lost in the sauce.” But what has helped keep her grounded during her four years here at the U being an activist is trusting the process. All your work as a campus activist is not wasted — your voice matters. As a first-year student, Sydney described to me how the community built around this type of activism keeps her motivated, and how, together, your voice isn’t so small.