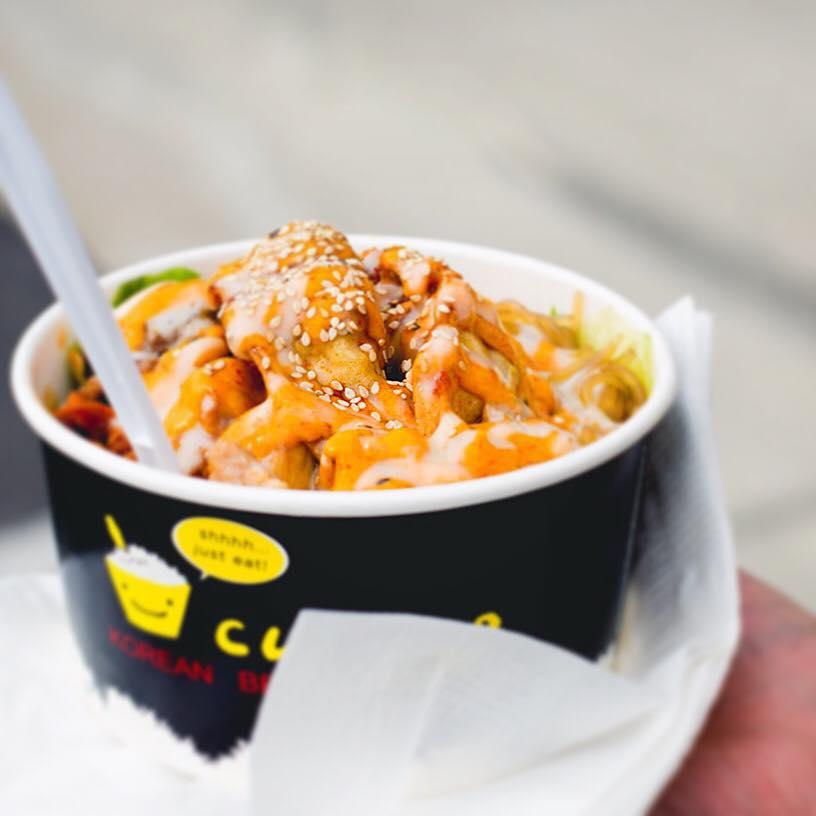 On a warm spring day, students can be found hanging around the many outdoor areas of campus. You can study, relax and check out some of the many food trucks that are on campus, one of which is the bright yellow truck immediately recognized as Cupbop.

The Utah-based company began in 2013 with just one food truck, and it has since expanded to four trucks in Utah. The company is currently looking at expanding even more, according to Maurice Reyas, a Cupbop food truck employee.

In addition to their food trucks, they have 20 brick-and-mortar restaurants in Utah stretching from Logan to Provo. They opened their first storefront in 2015 in Provo near the Brigham Young University campus.

The company also has locations in Oklahoma, Arizona, Colorado, Idaho and Nevada.

The trucks house a limited number of Korean dish options, whereas the store locations have a more complete menu to choose from. They limit the mobile menu to prepare food faster for those they are serving.

According to their website, Junghun Song, the founder of Cupbop, has a strong belief that Korean food has all the necessary ingredients to appeal to the world. “He started the first Cupbop food truck in 2013 with two friends, four main dishes and a variety of special sauces.”

Al-Sudani said she eats at the food truck at least once a week because she loves it.

Nevus said her favorite thing about Cupbop is it is quick and it’s “just so good.”

He works in the four food trucks which travel around the Utah Valley, providing their services to many different events, like BYU games and business events. They also frequently provide their service at catering events.

Cupbop serves Korean barbecue. Their bowls include a protein that is piled on top of rice, noodles and cabbage, and topped with sauces. It is mostly prepared at their commissary food prep location in the morning, Reyas said, and is then driven to the selling location and assembled into bowls.

The customer picks a spice level from 1 to 10. Reyas said, “the average kind of spice level people usually get is like a six or five.”

The food truck has been on the U campus for a couple of years now and comes on Mondays, Tuesdays and Thursdays.

Most days the truck has a long line of students waiting in front of it to get some food and the truck completely sells out most days.

“[Cupbop] is pretty popular,” Reyas said. “The truck opens at about 11 a.m., and we usually sell [out] before we’re ready to leave.”