This Point in Time: Changing the Climate on a Deadline 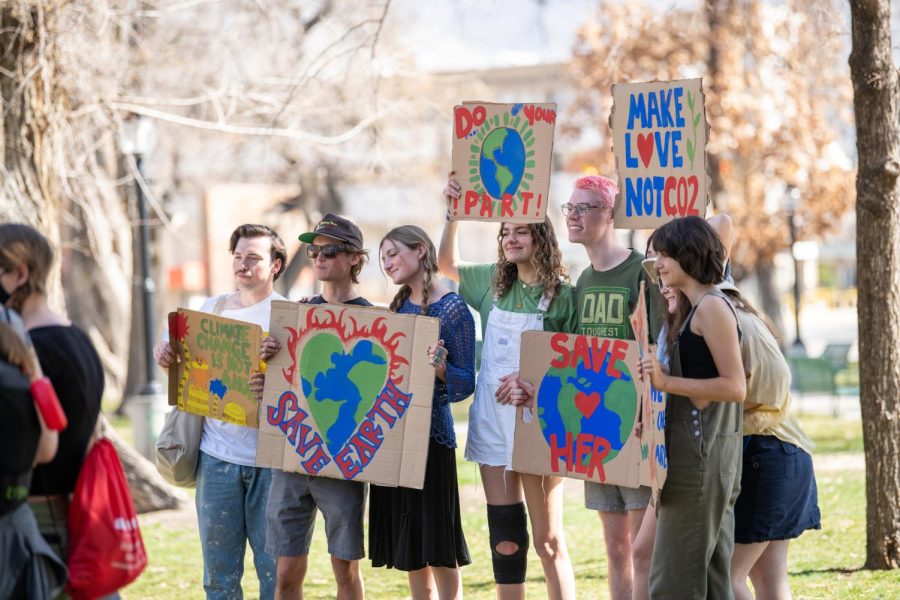 A group of high school students participate in the Climate Strike at Washington Square Park in Salt Lake City on March 25, 2022. (Photo by Jonathan Wang | The Daily Utah Chronicle)

2021 was one of the seven warmest years on record, according to the United Nations. In the United States, carbon dioxide emissions have increased by 11% between 1980 and 2019, the Environmental Protection Agency reports. National Geographic says since 1880, average sea levels have risen over eight inches.

With these statistics and more, climate scientists say between 2027 and 2042 lies the threshold for dangerous warming to occur, according to World Economic Forum.

The Climate Clock, when it was launched in New York in September 2020, put this time in visible form: 7 years and 102 days to save the climate. While installations such as this have been happening since 2009, this LED art structure was alarming — it was a call to action with a deadline.

‘Our Planet, Our Future’: Levels of Change

“Why are we prioritizing the economy over our right to a future?” asked a member of the crowd at the March 25 People Not Profit Global Climate Strike in Salt Lake City. Standing in front of the Utah State Capitol, the crowd directed their questions at the State Legislature.

This event marked the fifth year of such protests organized by Fridays for Future, which originated when Greta Thunberg, at 15 years old, protested at the Swedish parliament in 2018, according to Fridays for Future’s website.

The crowd lamented the state legislators’ inaction on climate policy, citing grave concerns about the health and safety of young people. The chant, “Our planet, our future,” could be heard following the protesters as they marched through downtown Salt Lake.

“We really want to show the people in power that we care about this and that they need to change,” said Melanie Van Hook, an organizer with Fridays for Future Utah, in a Zoom interview before the protest.

Fridays for Future holds protests every Friday at the Capitol. Their goal, Van Hook said, is to show they are committed week after week to inspire change in the legislature. However, she was particularly excited for the upcoming strike.

“When we have these big strikes that we put a lot of planning into, it’s showing that we care and that lots of people are willing to put in work,” Van Hook said.

According to Van Hook, while everyone has some power to help stop climate change, the burden to cause serious change falls on the government.

“There can’t be a shift towards change in the climate without change from above,” Van Hook said.

Thomas Reichler, a professor of atmospheric sciences at the University of Utah, agrees. He does research on climate change and its effects on things like wind and weather.

“The problem is our energy production, and that we use almost exclusively fossil fuels to produce our energy,” Reichler said.

Reichler also shared the view that average people should try to reduce their carbon footprint to help the climate. However, he said that much more drastic action needs to be taken, which can only be achieved by lawmakers.

“Carbon neutrality is essentially what needs to be done, and the governments will have to control that,” Reichler said.

Another concern echoed by both Reichler and the Fridays for Future protesters was the urgency required for climate action. The protesters urged lawmakers to make changes before dire consequences arose — Reichler highlighted some of those consequences.

“It surprised every climate scientist to see how fast the actual changes are taking place,” Reichler said.

One of those changes is the melting of arctic sea ice, which is happening much faster than climate models predicted, Reichler said. Losing sea ice makes the Earth warm more quickly.

Climate change will cause sea levels to rise, which will affect millions of people who live near the coast.

“Even if it’s just half a meter, that means when there’s a storm coming, the storm will be so much more damaging,” Reichler said.

In Salt Lake, climate change and pollution are deeply intertwined with daily life, and threaten things like the city’s public health and tourism industry.

This poses a major threat to Utah’s tourism industry, which prides itself on having the greatest snow on Earth.

To Van Hook, pollution of the Salt Lake Valley caused by fossil fuels is what the state legislature should be focusing on.