The Daily Utah Chronicle • May 7, 2022 • https://dailyutahchronicle.com/2022/05/07/mfa-gittins-gallery-sulky-sentiments-christina-riccio/ 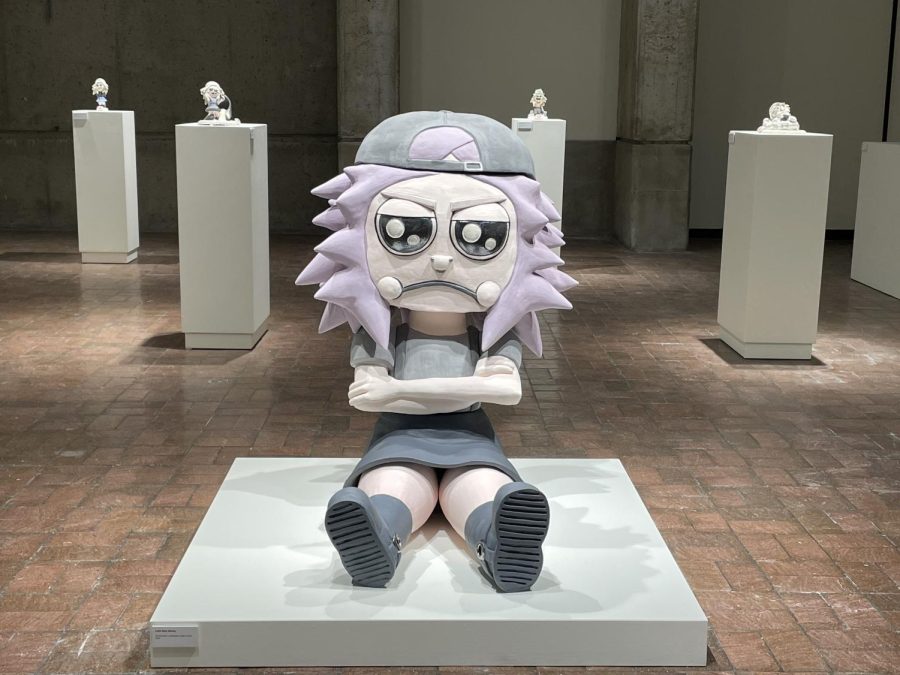 From May 2 to May 13, the Alvin Gittins Gallery on the University of Utah campus is holding “Sulky Sentiments,” an exhibition by artist Christina Riccio for her MFA thesis statement. Through the exhibition, Riccio uses ceramic pottery to examine experiences with mental health issues and lay bare their impact on her life. It is an extremely personal collection, both brave and intense but tempered with a sardonic, dark sense of humor.
Kitschy Figurines Used to Examine Mental Illness
The floor of the Alvin Gittins Gallery is dotted with pedestals on which sit tchotchke figurines, similar to those mass-produced by Hallmark or found on the shelves of a gray-haired grandmother.

The glazed, earthenware figurines all have the same subject — a young woman with shiny anime eyes, cherubic cheeks and ash-blonde hair topped by a green, backward baseball cap. Each figurine’s stand is garnished with hearts and flowers.

While the subject stays the same, the setting changes, depicting the myriad of ways that Riccio’s mental health issues have reared themselves and how they manifest in her emotions.

The figure dives headfirst into a beautifully rendered bag of Cheetos, binge drinks, sleeps atop a pile of medication and impulsively dyes its hair.

A truly shocking moment comes when viewers stand before one particular figurine labeled “self-harm.” The figurine gazes upward with a bashful, embarrassed half-smile — the sort meant to disarm an authority figure when you have done something wrong. Only after walking behind the figurine does one realize that the arms tucked behind the back hide wounds and a razor. It is the best part of the exhibition.

Plates are mounted on the east-facing wall of the exhibition, on which the same figurine subject depicts what Riccio refers to as “The Seven Stages of Depression” — bed laying, doomscrolling, randomly falling asleep, ordering subpar take-out, being apathetic after dark, a trash nest, and binging TV and insomnia. Riccio boils each stage down to an almost iconographic level, ultimately creating a snapshot in time with startling clarity and purpose.
Presentation Hides Message and Emotion
Riccio’s art style is purposefully kitsch, modeled after Hallmark tchotchkes and other commercial art. I understand the intention of the exhibition is to juxtapose the treacly representation and the grimness of the subject matter by illustrating the dual nature of living with mental illness.

There is a barely hidden sense of humor running through the pieces, from over-exaggerated facial expressions to the bright colors of the figurines, which prevents the work from becoming didactic and heavy-handed. This means that mental illness and its symptoms are more accessible to the general public — a good thing. Yet, kitsch is an art of shallow sentimentality and Riccio is unable to escape that.

The presentation creates a barrier between itself and the emotion of the piece, preventing one from engaging with it on an emotional level. The frilly pink hearts and glistening eyes detract from Riccio’s message.

Riccio is able to take a lifetime of ways that mental illness manifests and strip it into a representative image in a way that is clear, striking and efficient.

The fluorescent lights of the gallery are perhaps the most suitable way to view the pieces as there is no shading in Riccio’s work, and what you see is truly what you get. Conceivably, that is the right approach to a topic such as mental illness — hampered by the means of carrying the message. The focus on iconography makes the audience unable to connect or understand the emotions of the exhibition and leaves “Sulky Sentiment” in the shallow end.