The Daily Utah Chronicle • May 8, 2022 • https://dailyutahchronicle.com/2022/05/08/all-about-bach-project-director-dr-vedrana-subotic-recaps-series/ 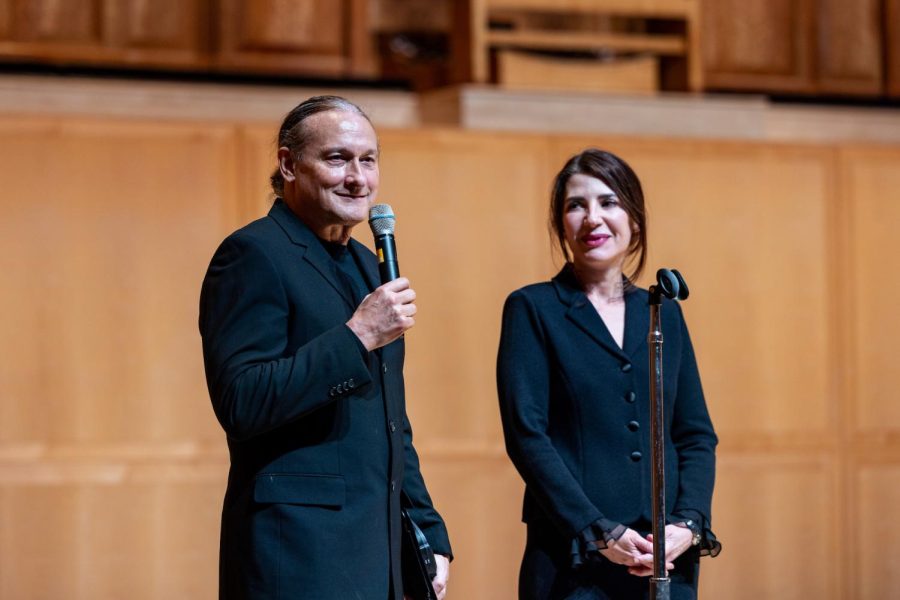 The All About Bach project with guest lecturer Christopher O’Riley drew to a close with its final performance on Sunday, March 27. The eight-week series of concerts, masterclasses and lectures began on Jan. 25.

Dr. Vedrana Subotic is the director of the project. Subotic, a professor at the University of Utah’s School of Music, concentrates on undergraduate and graduate level piano instruction. The All About Bach project is dedicated to the study and performance of Bach’s 48 preludes and figures from Well-Tempered Clavier.

Acclaimed classical pianist and Bach expert O’Riley was enlisted for the series. He is also known for his role in hosting the Emmy-winning NPR and PBS music program From The Top. This is the first collaboration O’Riley has done with an academic institution to teach his Clavier course material.

“It’s definitely a special opportunity,” Subotic said. All piano students at the U are required to perform a prelude or fugue from Well-Tempered Clavier to graduate. According to Subotic, the project was founded on the idea that students would benefit from an immersive study of the compositions.

What in the World is Well-Tempered Clavier?

Preludes are relatively shorter pieces of music that are played before longer compositions. Fugues are a specific type of complex composition built around a central musical theme called a subject. The works were written to be played on any key instrument — keyboard, piano, organ, harpsichord or other.

“The Well-Tempered Clavier is a canonic work for any pianist — it’s the first sort of complete body of work that encompasses complete piano technique and musicianship and it has served as such for the last 300 years,” Subotic said.

Modernizing the Study of Bach

Well-Tempered Clavier has extraordinary relevance in the modern study of classical piano. While many masterclasses at the U are single day presentations, All About Bach’s eight week series allows students to take a deep dive into the study of the compositions.

“We are the only school of music or piano program in Utah that has done a project of this magnitude and scope, and certainly no other in the nation has had the opportunity to do it in this particular format yet,” Subotic said.

Every week, O’Riley would present a lecture on an aspect of a work from Well-Tempered Clavier and then follow up with masterclasses in the U’s Dumke Recital Hall.

O’Riley also helped students use a digital platform to understand the work through historical instruments. “The students have had an opportunity to engage with Bach and technology in a completely new way … [they] were able to hear Bach performed on the instruments which Bach and his contemporaries used to play on some 300 years ago,” Subotic said.

According to Subotic, O’Riley’s instruction has had nothing but a “tremendous” impact on students. Student participation in the project was a record high.

“One of the wonderful things about his work on this body of work is how much it really breaks ground with the traditional ways of doing Bach, which have not been challenged for the last 300 years,” Subotic said. “To have something unique and different to say about them is really quite an accomplishment.”

An integral part of the series is Dr. Subotic’s community outreach “Give Bach” Competition. Submissions were open to any pianist, young or old. “Everyone plays Bach … Bach is such a universal and all-appealing composer,” Subotic said.

Five applicants from the community were selected as winners and given the chance to perform in one of four concerts on March 21, 24 and 27. Subotic hopes to continue to run the competition every March to create more opportunities for pianists in the Salt Lake community and to honor Bach as a composer.

In addition to the four concerts, the first of which occurred on Bach’s birthday, U students had the chance to perform at the Gallivan Center on March 23.

“It’s been amazing to see how pianists pulled together to do this project,” Subotic said. She hopes to increase the community outreach and interdisciplinary spread of the project after its first “test” year. “This has been very successful in how it was conceptualized,” Subotic said. “I can only see it going even bigger.”