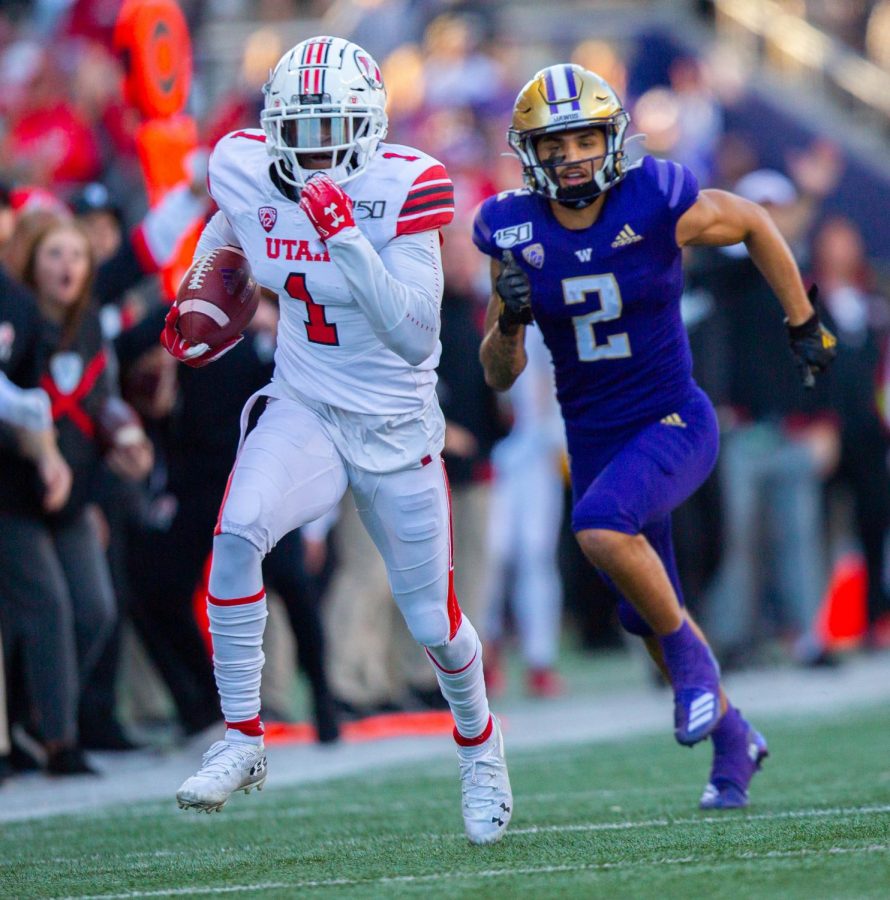 University of Utah Jaylon Johnson (1) scores a touchdown after catching an interception in an NCAA Football game vs. the Washington Huskies in Husky Stadium in Seattle, Washington on Saturday, Nov. 2, 2019. (Photo by Cassandra Palor | The Daily Utah Chronicle)

Student athletes from around the globe come to Salt Lake City to compete in the high-level athletic programs that the University of Utah offers. Athletes commit to playing in Salt Lake with aspirations of improving their athletic ability to one day become a professional in their sport.

The school offers nineteen different varsity programs, seven for men and 11 for women, in which they compete on a national level against other institutions’ athletic programs. Although it is the dream for most student-athletes to become pros, in reality, fewer than 2% of NCAA athletes ever reach that next level of achievement. Even with the odds that low, several Utah athletes have shown exceptional talent and commitment and will be competing at the professional level in their given sport.

Coming off a remarkable season, several athletes from the Utah football team decided to make the commitment to go pro as they declared for the 2022 NFL Draft. The team held a pro day on March 24 for all seventeen players who declared for the draft. Devin Lloyd chose not to participate. Lloyd, who won 2021 Pac-12 Defensive Player of the Year, is projected to be selected in the first round of the NFL Draft after one of the greatest defensive seasons in Utah Football history.

A few skill position players from the football team also declared for the draft with aspirations of becoming professional. One of these players is fan-favorite wide receiver Britain Covey, who has been a huge part of Utah culture since his first stint with the team in 2015. That same year he was named to the Freshman All-American first team.

After leaving for a two-year mission, Covey played his next season with the Utes in 2018 where he did not miss a beat and was named to the All Pac-12 first team. Three years later Covey still shows that he has what it takes to be an NFL player and declared for the draft with a year of eligibility left. Off the field, Covey is beloved by not only the fans but by his teammates as well. Several teammates expressed what it meant for them to lose a player like Covey, one of which being tight end Brant Kuithe.

“We just don’t have that little spunk, that little spontaneous guy,” Kuithe said of Covey to the Deseret News. “I’m happy for him. I’m excited to see what he does at Pro Day.”

Another Utah athlete who recently signed a pro contract is women’s volleyball star Dani Drews. The fifth-year senior is the all-time Ute leader in career kills, sets played, matches played and attempts. She has been a huge factor for Utah volleyball since she was a freshman in 2017. The Sandy native signed a professional contract with the Polish volleyball club the Grupa Azoty Chemik Police. Unfortunately, due to the war in Eastern Europe, Drews had to return to the United States for the time being, but is still under contract with the Polish club.

The Utah Red Rocks have been one of the top gymnastics in programs in the country for the past several years, and have had several talented gymnasts in the past decade. One of these gymnasts was MyKayla Skinner who participated in the 2020 Tokyo Olympics last year. Skinner chose to forego her final year of NCAA eligibility to compete on a professional level last July.

“I will miss being a part of Utah Gymnastics and competing in the Huntsman Center but there are things I want to do professionally and places my gymnastics can take me that won’t work as a college athlete, even with the recent rule change,” Skinner told KSL. “More importantly, I am not getting any younger and my body definitely needs a rest after this last comeback.”

Skinner said that she will “forever be a Red Rock.”

Skinner was one of three gymnasts who competed in the 2020 Tokyo Olympics alongside teammates Kara Eaker and silver medalist Grace McCallum, so don’t be surprised if we see a couple more Red Rocks turn pro in the upcoming years.