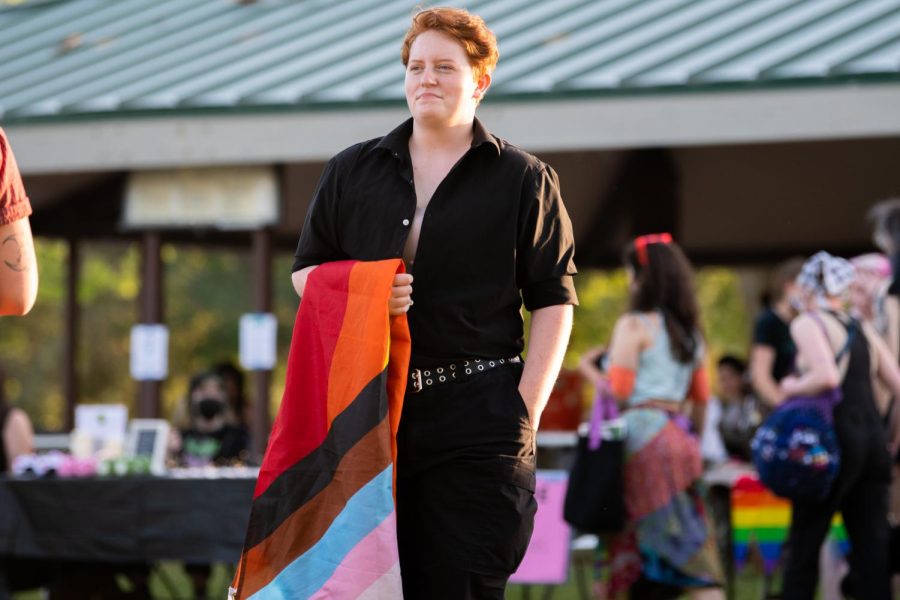 Hundreds of people gathered in Jordan Park on the evening of June 10 to support queer vendors, listen to speeches of community organizers and dance in the moonlight at Salt Lake Community Mutual Aid’s “Pride without Police” event.

Logyn Clair, a Utah Valley University graduate, has been an artist since they were young. They make art to show the beauty in queerness.

“I’ve spent the last few years kind of finding my identity and coming out and truly starting to live my life as a trans and queer person,” Clair said. “So I really wanted to create some artwork that people can feel represented by and see the beauty in queerness because so often in media and just, you know, with all the scary things in the world, it can be hard to remember how beautiful it is just to be who you are.”

In front of them, their table displayed original watercolor pieces designed after 10 different pride flags. Written on them was one word: proud.

“I chose to say proud rather than pride because proud is a verb — it’s an action,” they said. “I am proud to be queer.”

Across the way was a table displaying a victory: the Cottonwood Heights Starbucks certified their union. With six votes against and 11 in favor, the store became the first Starbucks to unionize in Utah on June 10.

Jacob Lawson, barista at the location and leader of the labor movement, said this victory came after a long, difficult road, with mistreatment from management.

“These companies do not care about us,” Lawson said. “We are cogs in a machine, and I think we’re showing with the Starbucks movement, that it’s time to stand up and show that we are not cogs in the machine — we are people who, you know, deserve to have our basic needs met.”


‘Out of the closet, into the streets’
After checking out the tables full of artwork and grabbing some free food, attendees could listen to a variety of speakers. Cameron, an organizer with SLCMA, introduced the speakers, saying this event was organized for a simple reason: The Utah Pride Center invited cops to Pride.

“To invite the cops is to invite people who have for as long as there is queer history, they have been oppressing, harassing, attacking and even killing queer folk wherever they get the chance,” they said. “There is no way to invite them to a true Pride.”

According to Cameron, being queer is defined by “finding community in defiance of the status quo.”

Cameron encouraged the crowd to listen to the speakers and think about which groups they would be interested in joining, because having a community makes the struggle easier.

Members from Undocu SLC, an anonymous collective focused on supporting the undocumented community, talked about the origins of Pride. They said both rainbow capitalism and the police, with its origins tracing back to slave patrols, have tried to erase the histories of the trans activists of color who paved the way for the modern queer community.

“They relentlessly and systematically enforced Black Codes, strict local and state laws that regulated and restricted access to labor wages, voting rights and general freedoms for formerly enslaved people,” they said. “So, to the Utah Pride Center, your empathy for people who struggle with police involvement in pride is not enough.”

They continued on to discuss the experiences of LGBTQ+ undocumented immigrants, saying they are exploited by their employers with few resources. They talked about the conditions of detention centers, including medical abuse such as forced sterilization.

“LGBTQ+ immigrants and transgender immigrants in particular, are at greater risk of harassment and abuse in these detention centers and are often forced into confinement with people of the wrong gender,” they said.

Another organizer with the group talked about the rising house and gas prices, asking the crowd to imagine how hard it is for a community denied of public benefits to survive.

“We are here as an intersectional, queer collective asking one of our communities to acknowledge the difficult reality of existing not only as queer, but also undocumented,” they said. “We are here asking that those with the privilege of a safety net put their acknowledgement into tangible action. We’re not liberated until all of us are liberated.”

Tears, a member of Wasatch Tenants United talked about housing discrimination for those facing sexuality and gender oppression, saying that statistics don’t reflect the reality.

“We have to reclaim our footing and re-situate ourselves in the context of revolutionary class struggle,” they said. “We have to organize in the interests of poor working class LGBTQ people, which in turn also means that we have to reject the colorblind logic that encourages us to use queerness as a means of covering up racial oppression and imperialism.”

Kit Grob from Starbucks Workers United talked about the intersections between the fight for workers’ rights and the fight for queer liberation.

“The fight for gay liberation has always been led by the poorest and most vulnerable members of our community and I am enraged at how this fact seems to have been forgotten,” Grob said. “Corporations that not long ago refused to take our money are now marching in our parades and tabling at our festivals that we are supposed to pay to attend?”

Grob spoke about the foundations of the queer community, and how those who were unabashedly queer created networks of support among each other where they built shelters to keep each other safe, and did art and drag for entertainment.

“But we have been betrayed by people who don’t want community with us, betrayed by the thin and abled, white, wealthy and cis people that were always ashamed to be associated with us,” Grob said.

According to Grob, fighting for unions and supporting mutual aid networks are tangible ways to build community.

“We cannot define our community based on identity any longer — I have nothing in common with queer people who are willing to hold hands with police and march in a parade,” Grob said. “The term ‘ally’ can no longer exclude queer people. We have to hold each other responsible to be better allies to the other people in our community who need us and to the queers of the future.”

“It was at the leadership of white queer and trans people that the movement for intersectional queer and especially trans liberation was derailed,” they said. “It was at the hands of European colonizers that Indigenous understandings of gender and sexual expansiveness in the larger world was criminalized, destroyed and stigmatized.”

En said queer people need to liberate themselves — it is not enough to have parties at queer clubs, the community needs leaders and caretakers.

“Listen to those of us most marginalized and lift them to the front,” they said. “That is the only way forward.”

The final speech of the night was from Ermiya Fanaeian of the Salt Lake City Armed Queers. She talked about the roots of Pride being “a radical rebellion against policing.”

When Fanaeian chanted “Out of the closet,” the audience responded “Into the streets.”

The night concluded with music and dancing, gratitude for all who helped make the event come to fruition and encouragement to meet new people and build connections — connections echoed by many speakers as a necessity in the fight for queer liberation.