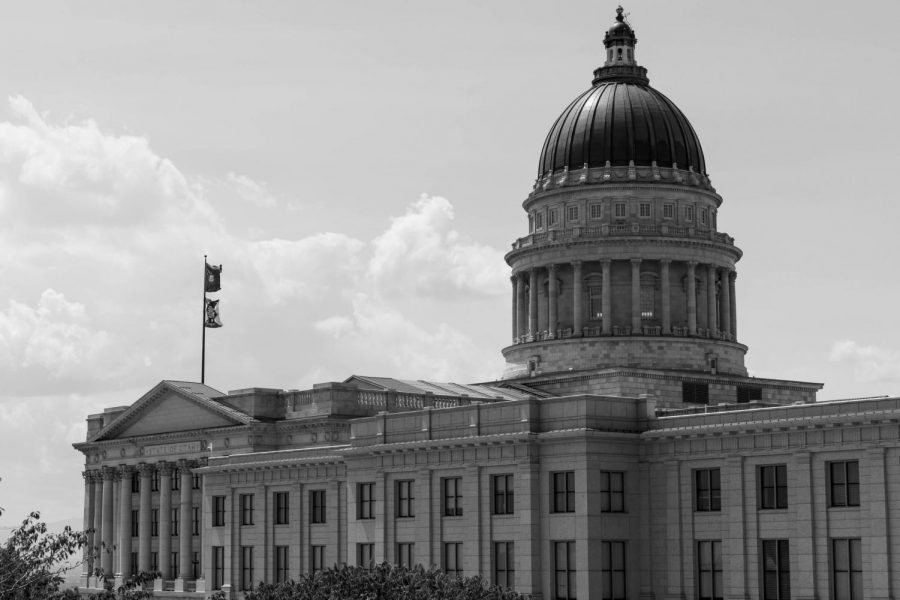 A view of the Utah State Capitol Building in Salt Lake City on Saturday, August 21, 2021. (Photo by Kevin Cody | The Daily Utah Chronicle)

Natalie Reese was one of the student leaders of March for Our Lives Utah in 2018, which took to the streets after the school shooting in Parkland, Florida which killed 17 people. Four years later, as a junior at Brigham Young University, she is fighting for the same cause.

“It’s definitely discouraging and I did not plan on being back here in four years, but here we are,” Reese said.

Almost six months into the year, there have already been at least 246 mass shootings in the United States.

Among these shootings are the racist attack at a grocery store that killed 10 people in Buffalo, New York and the shooting at Robb Elementary School in Uvalde, Texas that killed 19 children and two teachers. The shooting in Texas took place just 10 days after the one in Buffalo.

These incidents have led to a renewed push for gun control legislation, with thousands gathering nationwide on June 11 at March for Our Lives rallies in at least 45 states, including Utah, where hundreds of people gathered to march from West High School to the state Capitol.

As the protestors gathered in front of West High, Savannah Pursglove, head organizer of the event and BYU student, gave instructions to the crowd and led them in practicing chants. Students and educators were instructed to move to the front of the march.

In attendance at the march were recent graduates of Judge Memorial High School Penelope Dalton and Georgia Stockham. They said the fear of mass shootings is something that has been present for the entirety of their school lives.

Stockham said witnessing these events unfold has motivated her to be politically engaged in helping make change now that she is old enough.

“I remember doing the 17 minutes of silence for Parkland … we all stayed quiet and it was just like, ‘Okay, this is where it’s going to change,’ and it didn’t,” Stockham said. “Now that I’m old enough to finally vote and really be active politically I just want to actually change this.”

Protestors held up signs reading “Don’t just pray, do something,” and “Why are we making our children braver than our leaders?” as cars passing by honked their horns in support.

Chants of  “No more silence, end gun violence,” and “Hey, hey, NRA, how many kids have you killed today?” could be heard as protestors marched. As the group approached the Capitol and marched inside, chants of “This is what democracy looks like” and “Vote them out” echoed inside the building.

Despite her disappointment at having to return to fight for the same cause four years later, Reese said she is hopeful that their actions will lead to change.

“After 2018 in a midterm election, 70 gun legislation bills were passed either at the state or federal level,” Reese said. “So it is possible to have change.”

Reese said the organization is pushing for “common sense gun legislation,” and is calling on Sen. Mike Lee and Sen. Mitt Romney to vote in favor of the gun control bills that were recently passed in the House of Representatives and are not expected to pass the Senate.

The first bill is a package of gun control legislation called the “Protecting Our Kids Act.” Among its reforms are raising the minimum age to purchase semi-automatic weapons from 18 to 21 years old, banning large-capacity magazines and bump stocks and regulating the storage of firearms.

The second bill would set a federal “red-flag law,” which allows a person’s firearms to be temporarily confiscated if they are considered to be a danger to themselves or others.

Reese said these are regulations which all people, including conservative voters and gun owners, should be in support of.

“We’re not advocating for all guns to be taken away,” Reese said. “I’m totally fine with people having hunting guns, but we think there are some guns that shouldn’t be in the hands of citizens.”

Dalton comes from a gun-owning family and said she wants to see legislators raise the age to buy assault rifles to 21, add a mandatory waiting period after gun purchases and expand background checks.

“I think it’s insane that I can’t go and drink a beer, but I can go and buy an AR-15 if I want to,” Dalton said. “Three days can be the change between someone being angry and shooting at the school versus realizing that maybe that’s not what they should do.”

Once the protestors had filed into the Capitol building, they gathered to hear various speakers take the podium. This included speeches from the original March for Our Lives student organizers, an elementary and high school student, and local educators and activists.

State Sen. Derek Kitchen, who recently opened a bill in the state legislature to raise the minimum age for buying a gun from 18 to 21, was also in attendance at the protest. Kitchen said he opened the bill to take an important step towards ending gun violence.

“We should be able to go to the grocery store, or to the movie theater, or to go to fourth grade class and learn without fear of being murdered,” Kitchen said. “When you’re nine years old, you should be more focused on learning math and making friends than you should be about losing your life unnecessarily to gun violence because politicians refuse to take any meaningful action.”

When one speaker prompted the crowd to look around and question how many politicians they saw, one person could be heard shouting, “Derek Kitchen.” Sen. Kitchen said although he wished he were joined by more legislators, the bottom line is for them to show up when it comes to signing legislation.

“I wish more politicians would show up, but I don’t need them here if they’re going to vote for the right bills,” Kitchen said.

Kitchen encouraged people who want to see gun reform to stay engaged by voting and writing to their senators and representatives in the House to support his legislation to raise the age to purchase a firearm.

“Write your senator, write your representative in the House and write the governor and then do it again,” Kitchen said. ‘You’ve got to keep up the pressure, and they’ve got to feel it.”

Deborah Gatrell, a high school social studies teacher in the Granite School District, shared her experience of losing a student to a shooting off campus in her speech, and spoke against the framing of school shootings as an issue for schools to take on individually.

“Schools cannot bear this burden alone,” Gatrell said. “Yes, we need to pay attention to social and emotional learning and safety and bullying, and none of those require us to carry a gun.”

In her speech, Terri Gilfillan, a board member at the Gun Violence Prevention Center of Utah, discussed the 10-year report on gun violence the center created and sent to state legislators, which highlighted solutions supported by evidence. She criticized their inaction and called for legislators to recognize the solutions out there that have been proven to work.

“We don’t have to live like this,” Gilfillan said. “We know that this doesn’t happen in other developed countries. They also have mental health issues … but they do not have the carnage that we have been experiencing every day.”

Gilfillan warned of the urgency of taking action.

“We are a tinderbox here in Utah,” Gilfillan said. “What happened in Texas was devastating. But it is happening everywhere and it’s going to happen here, it’s just a matter of time. … We have one of the laxest gun laws in the country right here in Utah. … Our legislators care more about the gun lobby than they care about the people of this state.”

University of Utah senior and March for Our Lives organizer Saey Kamtekar ended her speech with a memorial of the victims of mass shootings in Buffalo, Uvalde and Tulsa, listing their names and ages.

“I ask you all to remember these names, names that could have been on the news for reasons other than pointless bloodshed at the hands of state-tolerated gun violence,” Kamtekar said. “Go forth with empathy and anger and fight for the future stolen from countless others.”

Reese said if there’s one message she hopes people in attendance at the protest leave with, it’s their power to hold elected officials accountable.

“I want people to vote in midterms,” Reese said. “I want them to vote out politicians that take money over people’s lives. We have that power to elect and un-elect people and I think it’s time that we did that.”