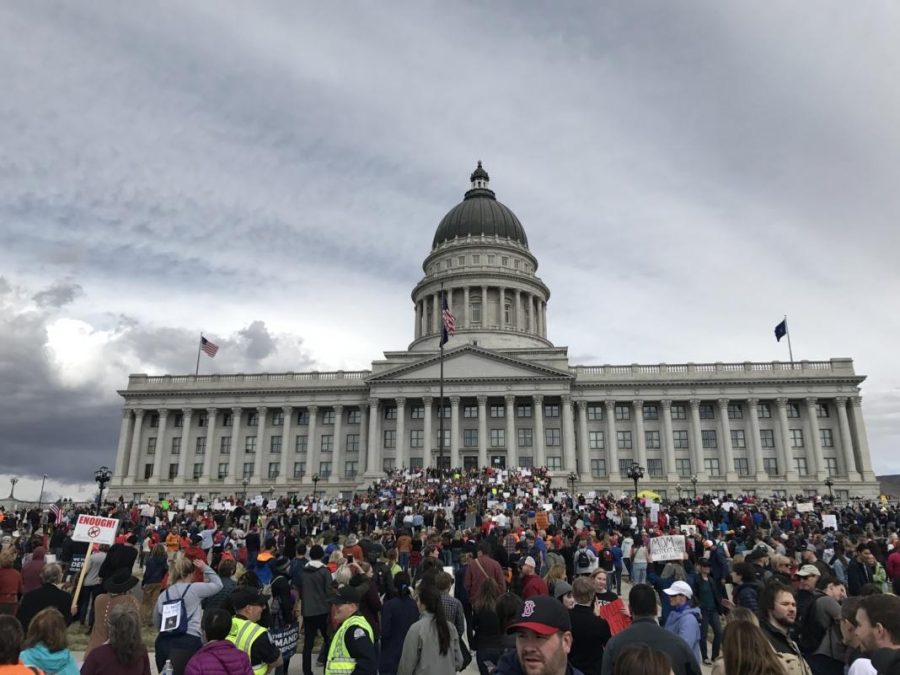 An estimated 8,000 people attended the March for Our Lives rally on March 24 at the Utah State Capitol. (Chronicle archives)

Gun control legislation has been put in the spotlight in the wake of several mass shootings across the country, including those in Uvalde, Texas and Buffalo, New York, prompting legislators to act from the state to the national level.

In a week of action on gun violence, Democrats in the U.S. House passed two major gun reform bills on June 8 and 9. The first was a package of eight bills named the “Protecting Our Kids Act.” This includes bills that would raise the purchasing age for semi-automatic rifles from 18 to 21, create new requirements for storing guns at home and bar large-capacity magazines.

The second bill would create a federal red-flag law, allowing law enforcement to temporarily confiscate an individual’s gun if they are deemed a danger to themselves or others by an “extreme risk protection order,” which can be obtained by the individual’s family members or law enforcement.

These bills are not expected to garner enough Republican support to pass in the Senate.

A group of 10 Republicans and 10 Democrats in the Senate have also been working on reaching a bipartisan deal for a bill. Though it would be the most significant gun legislation in decades if passed, it leaves out many of the reforms included in the House bills which Democrats have been pushing for. Among the bill’s Republican supporters is Utah Sen. Mitt Romney.

The bill would not raise the age to buy semi-automatic rifles to 21, but would require enhanced background checks for purchasers under the age of 21 involving the investigation of juvenile and mental health records.

The bill would not set a federal red-flag law, but provide grant money to incentivize states to pass red-flag laws, provide money for mental health resources and increased safety in schools. It would also close the “boyfriend loophole” so that people convicted of domestic violence are prevented from purchasing a gun even if they were not married to the victim.

Across the country, state legislatures are also taking the question of gun control into their own hands.
Gun Legislation in Utah
According to a study from Everytown for Gun Safety, Utah ranks 37th in the nation in strength of gun laws. Just last year, H.B. 60 was passed in the state legislature, removing the permit requirement for concealed carry.

House minority leader Rep. Brian King has been a long-time advocate for gun reform. In the 2021 legislative session, King sponsored H.B. 133, which would require private sellers to administer background checks. He also sponsored H.B. 477, which would collect information on where people on the prohibited list were able to obtain a gun. Neither of these bills passed.

However, King said he has had success in passing measures to increase the likelihood that individuals convicted of domestic violence charges end up on the prohibited list and are not able to possess weapons. He said the state has also funded research into how people die from guns.

“We got about a quarter of a million dollars appropriated by the legislature for a study of who in Utah is dying and being injured through the use of guns,” King said. “We found among a lot of other information … that over 85% of the people who die from the use of a gun are suicides.”

King said he saw no benefit to removing the permit requirement for concealed carry. As a gun owner and a legislator wanting to experience it for himself, King had taken the class required to get a permit and said he had thought the limited training was better than nothing.

“When you can just go out and buy a gun and carry it around in your purse or in your coat … I don’t think there’s any question that you’re going to have more accidental discharges, you’re going to increase the likelihood that people throw a loaded gun into a glove compartment and in a moment of road rage are more likely to have access to it and use it,” King said.

King said he would reach out to wary gun-owners by framing the need for gun control as a protection of a right just as important as the rights guaranteed by the Second Amendment: the right to live without constant fear of being killed.

“There are other rights that we all have that, at times, come into conflict with the Second Amendment,” King said. “I hope that we all agree that we have the right to walk around wherever we are in our neighborhoods or in our streets, downtown, college campuses, going to a neighbor’s home, going to worship services, whatever, and feel safe, that we shouldn’t have to fear for our lives … because someone is carelessly discharging a gun.”

King compared the regulation of guns to other items that are heavily regulated, such as vehicles, tobacco and alcohol. He used this comparison to support the concept of raising the minimum age to purchase semi-automatic weapons.

State Sen. Derek Kitchen recently opened a bill file in the state legislature to raise the minimum age for buying a gun from 18 to 21. Kitchen said he opened the bill to take an important step towards ending gun violence, but also because it is a bill which he believes could draw support from Republicans, referring to Sen. Romney’s support of the concept as an example.

“My bill is a simple step, but an important step that will help prevent gun violence in our community,” Kitchen said. “I opened this bill because of that reason, but also because I believe Republicans will come to the table with raising the minimum age to purchase a gun.”

Kitchen also expressed support for waiting periods, universal background checks and a reversal on the policy that allows people to conceal carry without a permit.

King said he would support Kitchen’s bill and said he has opened bill files for several other possible reforms. Among the ideas on the table are regulations on safe storage of guns and ammunition and requiring three-day waiting periods and insurance when purchasing a gun.

“Putting a three-day waiting period in place, requiring liability … that’s going to weed out a lot of gun owners right there, if they are someone who can’t demonstrate that they are of an age or have a clean criminal history that will allow an insurance company to feel good about insuring them,” King said.

King also discussed several improvements that could be made surrounding the “prohibited list” of individuals barred from buying a gun, including better enforcing the prosecution of individuals on the list who obtain weapons. King referenced Lauren McCluskey’s killer as an example.

Red-flag laws, which currently exist in 19 states and Washington D.C., have also been sponsored previously in the Utah state legislature by Rep. Stephen Handy, but never passed. After trying to pass the bill for three years, motivated by the risk of suicidal individuals putting themselves in danger, Handy called passing the law in Utah “just too high of a hurdle.”

As someone who has sponsored legislation in the area of mental health, King has mixed feelings about red-flag laws, though he remains open to exploring how it could be done effectively.

“I worry that if we’re not careful in how we talk about that, think about that, that we can do a lot of stigmatizing of people who struggle with mental health issues and make it more likely that they’re viewed as … being a danger to society,” King said.

In the 2022 general session, the state legislature also passed S.B. 115, which expressed the state’s total control over gun laws in Utah regardless of regulations set by local municipalities. Salt Lake County Mayor Jenny Wilson said the measure was intended to undermine the requirement she had put in place for background checks at gun shows in Salt Lake County.

Considering this ongoing pushback to expanding gun control in Utah, King said it would take a long time before significant change is made, something which would take “long term breaking down of real structural attitude and structural forces with money and with lobbying.”

However, he said the idea that nothing can be done to prevent mass shootings is “absurd,” referencing the success of other nations such as Canada in reducing gun violence with heavy regulation as an example of that. King hopes that here in Utah, incremental change is possible.

“If we can do anything, even if it’s relatively narrow and focused in scope, it’s better than doing nothing,” King said. “I do think that there are things that we can do at the Utah State Legislature to chip away at, in a positive sense, the number of deaths.”