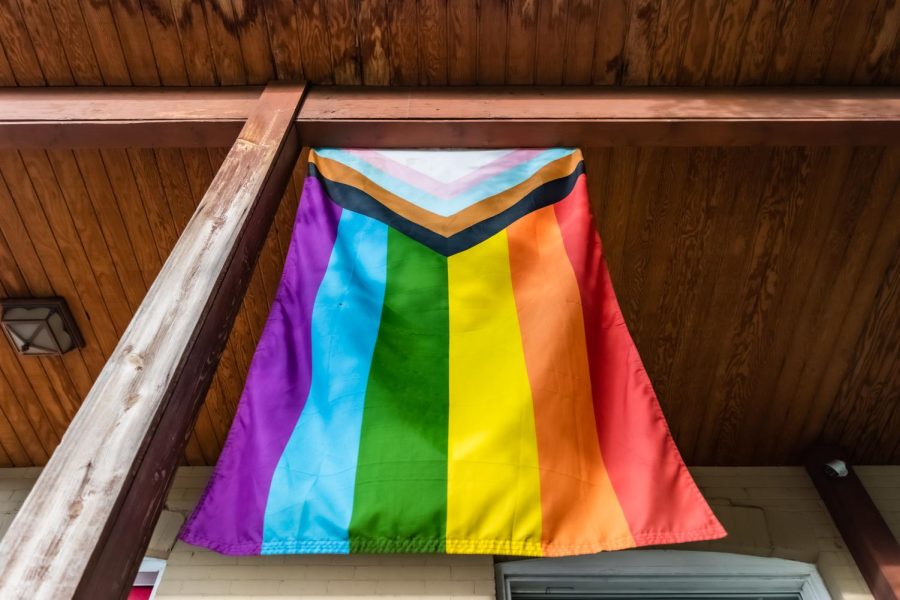 A progress pride flag hangs outside of a Salt Lake City home on June 22, 2022. (Photo by Jack Gambassi | The Daily Utah Chronicle)

Only a handful of positive representations of queer people exist in popular media. Of them, the majority are white. Why are white LGBTQ+ people more socially palatable than queer people of color?

The history of queer liberation has been blatantly whitewashed. So have queer spaces and acceptance. We’ve effectively erased the voices of those who fought the hardest for our rights. Black and brown trans women likely started the Stonewall riots, but the media credits white gay men.

Gender and sexuality oppression binds queer people together. But with the added intersection of race and ethnicity, unified identity pride gets messy. White gay privilege exists in tandem with queer discrimination: being queer doesn’t excuse casual acts of racism.

Racial prejudice affects half of Black, Asian and minority ethnic LGBTQ+ people within the queer community. People of color, especially Black men, are more likely to experience racial and ethnic stigma in LGBTQ+ spaces — ironically, in the very places that supposedly accept everyone.

These queer spaces are made with white, gay men in mind. This includes bars and Pride events, famously filled with white people. White LGBTQ+ people may face discrimination, but they also wield a lot of privilege due to their racial identity. We used to recognize HIV as a primarily white, gay epidemic. When that conception broke down, the disease became more of an afterthought — though it affects people of color substantially, particularly Black women.

Whiteness remains the perceived norm for queer identities. You can’t be BIPOC and queer, that’s just too many marginalizations. Dating apps exemplify this. Minefields for people of color, racism is rife and an accepted norm on many of these platforms. Grindr notoriously enables and allows gay men to justify their racism.

We witness whiteness as the ideal conception of gayness constantly. People of color often hear phrases like, “You don’t look gay,” or see dating profiles that explicitly degrade their ethnicities. Even gay bars discriminate against patrons of color, yet Black queers greatly influenced the queer nightlife scene.

That being said, white people themselves are not the problem. The problem lies in social standards that have allowed for different people to operate on separate playing fields. Institutions of racism continue to flourish and poison everything they touch. Sadly, there’s no easy fix. It’s understandably difficult to recognize acts of marginalization that don’t actively impact you. However, that’s no excuse to willfully ignore it.

Being queer may have traumatizing consequences and dividing the community up based on race alone is detrimental. But it’s important for non-people-of-color to realize the lived experiences of those unlike them. Race affects everything, arguably more than gender and sexuality.

People can have many different identities at once. Reducing someone down to a small facet of their being is ignorant. I am a person of color. I am also queer. I am both of these things at the same time, regardless of whether or not they are seen as acceptable.

I have been asked whether or not I feel guilty over my identity as a lesbian. Countless times, people have wondered how my Chinese side of the family feels about it, if I got disowned, what my father said. Frankly, if I looked more like my mom, I doubt I would get those questions so often.

Gay people can be just as bad as everyone else when it comes to understanding intersectionality. White queer folks, take note. No community can exist divided into castes. It’s important to remember that while we have differences, we all still share some universal experiences. Use your privilege for good. Raise up the voices of those further marginalized within the community. Recognize your own implicit biases regarding people of color because while they often don’t reflect you as a person, we must understand how and why society has shaped these views. Allyship is crucial, as queer people should know by now.

Establishing more safe spaces for queer people of color could also help, as they are few and far between. Most exist in online circles from the fringes of the internet. Physical locations for individuals to build solidarity connects people with shared lived experiences and would likely help to alleviate the mental health issues pervading queer BIPOC communities.

Calling out privilege is uncomfortable, but necessary nonetheless. Being queer is not a get-out-of-jail-free card, and it’s time for white gays to stop acting like it is. The next time someone says, “I can’t be racist, I’m gay,” please remind them that they are, in fact, both racist and gay. Identities are multi-faceted, after all.