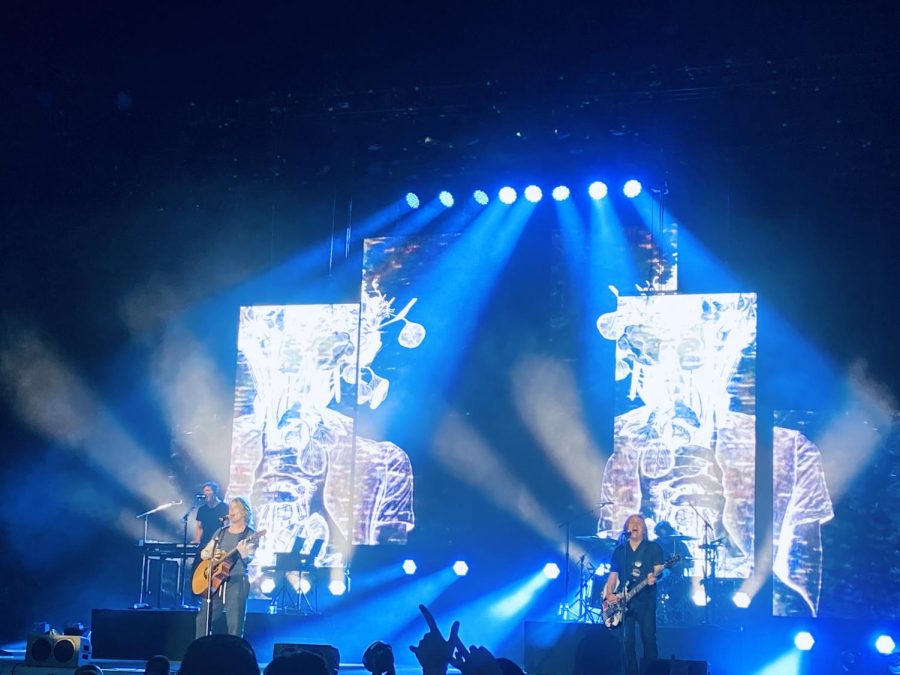 As the sun began to set on July 26, nearly 20,000 eager fans poured into the Usana Amphitheatre in West Valley City. The Goo Goo Dolls show was especially anticipated, as, due to the pandemic, the band had attempted two previous shows at the amphitheater that they were forced to reschedule. Needless to say, long-waiting fans offered the band a warm, belated welcome as the Goo Goo Dolls played an invigorating and enlivening show.
Two Bands Fit All
Something extraordinary to observe during obligatory pre-show people-watching was the kaleidoscope of attendees. As generational tastes in tunes tend to change as quickly as fashion preferences, it is rare to see such a vast age range at a rock show. The Goo Goo Dolls have a career that spans 35 years and have been successful in not only keeping their original fans wanting more, but recruiting new ones along the way.

Another band with impressive staying power with their fans, Blue October, was the opener for the Dolls. With impressive energy and charisma, they were able to get even the most unsuspecting attendees up and moving. Both the Goo Goo Dolls and Blue October are labeled as alternative rock bands, but Blue October leans a bit more toward the heavier side of rock. This heaviness was well-balanced with the band’s short but sweet personal introductions to their songs.
Personal Touch
These small self-revealing moments were a shared pattern between both bands. While their crew members swiftly exchanged and tuned the artists’ instruments, the lead singers of Blue October, Justin Furstenfeld, the Goo Goo Dolls, John Rzeznik, each had a moment to share bits of themselves with the crowd.

Both spoke to their past addiction struggles, as well as opened up about how grateful they are for their sobriety. Furstenfeld genuinely thanked the crowd before stating, “Man, this is what I live for,”  referring to the unique energy of a live audience and invoking the title of their latest album. It was a truly symbiotic relationship between the performer and audience, and a special experience many have been craving since the band’s rescheduling.
This is What We Live For
One of the most unifying moments of the show was near the end of the Goo Goo Dolls’ set, when they played their renowned hit, “Iris.” When Rzeznik got to the chorus for the second go-round, he held out the microphone for the crowd to sing in his place, “Yeah, you bleed just to know you’re alive.”

As the band, audience and vibrant ASL interpreter came to a unified crescendo, it was a true feeling of being alive. Maybe that is why it’s called a live show, because it has the power to make you feel truly alive.