Cowley: The Inaccessibility of Campus Housing 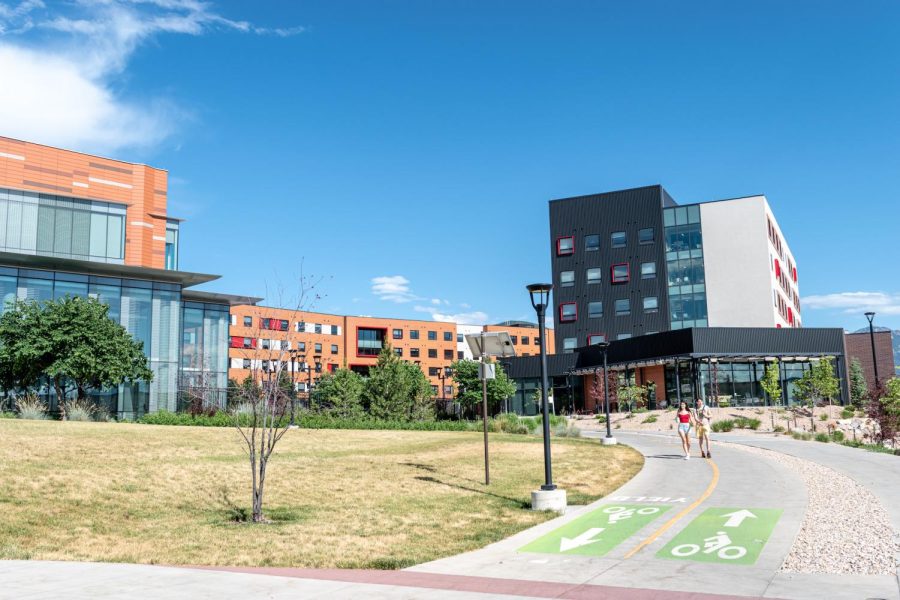 Students walk down campus and pass the Kahlert Village dorms and the Student Life Center in Salt Lake City on July 1, 2022. Due to its close proximity, campus housing provides students who can afford its costs with opportunities to use facilities paid for by student fees and to get involved in campus events and the community. (Photo by Jack Gambassi | The Daily Utah Chronicle)

During my freshman year of college, I lived in one of the first-year dorms on campus. I was told that by living on campus, I would meet more people and have an overall more successful first year of school. I was lucky enough to have a single room, but I soon learned that dorm room conditions feel extremely bare bones. My dorm did not have a single kitchen in the building and housed two washer and dryer units for the whole floor to use. While universities push for students to live on campus, not everyone can afford to spend extra money for lower quality. On-campus housing is not nearly as accessible as the University of Utah claims it is.
The Scramble for Housing

This has left the majority of the student body scrambling to find housing for the upcoming school year. I am currently in the process of finding an apartment for the fall, and it has been nothing but frustrating. Rent prices in Salt Lake City have increased 10.1% from 2020-21, according to KSL TV, and with the influx of students in the same boat as me, I know it will be extremely difficult to find affordable housing. I have left countless voicemails to leasing agents in the past two months only to get no response. It is downright irresponsible for the university to put the vast majority of students in such a vulnerable position — especially students who already struggle financially.
Lack of Amenities on Campus
Students who live on campus also face unique challenges. Making the high costs of campus housing more egregious is the lack of amenities included in dormitory housing. For the majority of students living in dormitories, there is a lack of clean, usable kitchens and laundry facilities. When I was living on campus, the lack of amenities seriously affected my quality of living. My suitemates and I often had to wait long periods of time between doing loads of laundry just because the machines were not available.


Poor Quality Food
The lack of a kitchen made it especially hard to feed myself. College students often struggle with nutrition — either not having the means or time to make nutritious meals, according to Live Well @ ASU.  Refusing students spaces to prepare food only worsens the problem, especially when the staples in the dining halls are things like pizza. I remember living off of microwave mac ‘n’ cheese for a long time just because it was one of the only things I could easily make in my dorm, and I didn’t want to eat in the meal halls.

Most students living on campus are required to have a meal plan, but the meal plan itself is much more expensive than just buying groceries. On average, a month’s worth of groceries for one person would cost between $229-419 per month, according to the USDA, a school meal plan will cost a student around $558 a month if they’re eating all three meals on campus for a nine-month period. These prices are especially exploitative because on top of the generally low-quality food served at meal halls, college on its own is extremely expensive. For lower income students, it’s not feasible to spend extra money to live or eat on campus.
Disadvantaging the Student Body
There are actual benefits to living on campus for those who can afford it. The Oregon Institute of Technology students who live on campus tend to have higher GPAs and have access to more events and activities. However, the current housing system makes it extremely difficult not only to secure housing on campus but also afford to live here in the first place.

The U has a responsibility to provide affordable, accessible housing to its student body, especially when the cost of college is already so great. Students should not have to choose between affordable housing and enriching their academic experience.