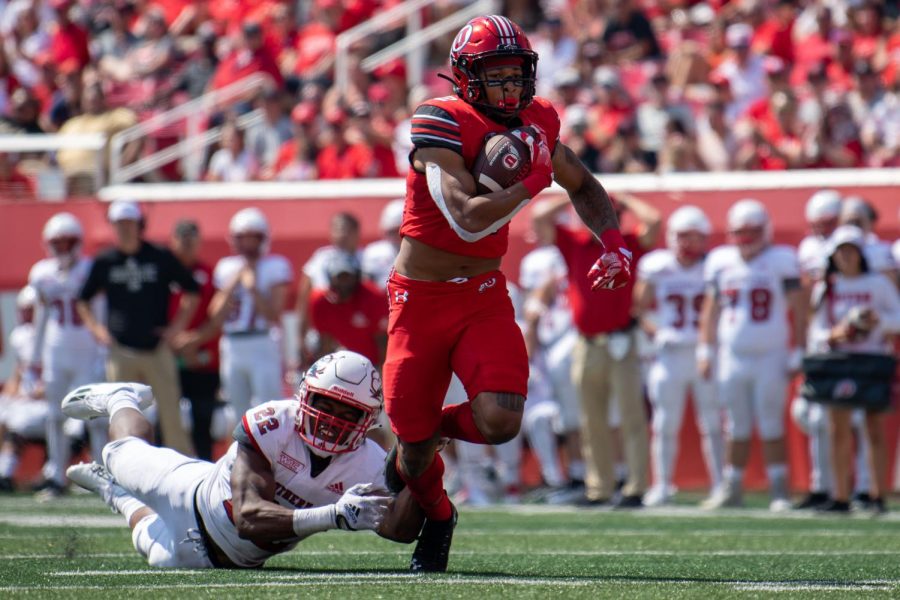 By Sean Overton and Ethan Pearce

Recap
The University of Utah football team opened their home season against Southern Utah University on Saturday. The Thunderbirds boldly opened with a surprise onside kick. Fortunately, the Utes retained possession and fantastic field position to start the game.

Utah was able to capitalize off this, with Tavion Thomas finding the endzone to give Utah the early lead. Utah showed dominance in both rushing and passing.

But the next possession for Utah wouldn’t end the same way. After a good defensive stop, Utah’s offense was plagued with penalties, and they were forced to punt from their own 14.

Utah’s defense showed why they are still one of the best, again shutting SUU down. But Utah’s offense couldn’t hold their weight, immediately fumbling the ball and giving possession to the Thunderbirds on the 28.

Southern Utah immediately responded, with quarterback Grady Robinson immediately taking it to the endzone for a 28-yard touchdown, tying the game.

Utah’s offense was fueled by multiple big plays the next drive, going more than 10 yards multiple times. The first quarter came to a close with a tie, but Utah was knocking on the door.

Thomas once again showed his toughness, finding the endzone just 30 seconds into the second quarter and Utah quickly retook the lead.

They kept this momentum going, tipping and intercepting the ball on the first play. Junior Tafuna got the grab for Utah and gave them excellent field position.

Chris Curry quickly capitalized on this field position, finding the endzone from 12 yards out. This was Curry’s first career rushing touchdown.

Utah worked quickly on the defensive side, forcing a turnover-on-downs and gaining possession on the Thunderbirds 46-yard line. Micah Bernard took it 36 yards to set the Utes just 10 yards from the endzone.

This time, Utah was unable to find the endzone and settled with a field goal. Once again the defense was amazing, forcing a three-and-out for SUU.

A short offensive drive for the Utes was capped off with a touchdown from Brant Kuithe. Utah held a large 31-7 lead with four minutes left before halftime.

The first half was completely dominated by Utah. Quarterback Cameron Rising went 17 for 23, tallying 254 yards and three touchdowns. Kincaid had two of those touchdowns, and 107 of the yards.

Utah opened the second half strong, scoring off of a pick six. The game continued as expected, with Utah repeatedly scoring while holding off SUU.
Analysis
Utah’s passing game started off slow today, but really picked up starting in the second quarter. Rising found his stride and threw for three touchdowns before sitting in the second half with the Utes up big. They got the tight ends involved a lot, as expected, but they could stand to vary the passing attack a little more with some extra targets to the wide receivers. Especially early on in this game, it felt like it was tight end or bust, especially in the red zone. That can work against Southern Utah, but a stronger opponent won’t let that slide.

The defense did their job today and did it well. They only allowed a single touchdown, which was set up by a Thomas fumble in Utah’s own territory. Outside of that, they were superb, never allowing the Thunderbirds to have any sort of rhythm on offense.

Freshman running back Jaylon Glover showed some flashes in his touches in the second half, scoring two touchdowns and racking up a good amount of yards after contact. He looked confident and fired up in his first opportunities as a collegiate athlete.

The main takeaway from the day is simply that Utah looked good against an overmatched opponent. They ran up the score with no mercy despite a slow start. They’ll have some things to work on before getting into Pac-12 play, but they got out of the day with a lopsided win and no injuries, and that’s all you can ask for.