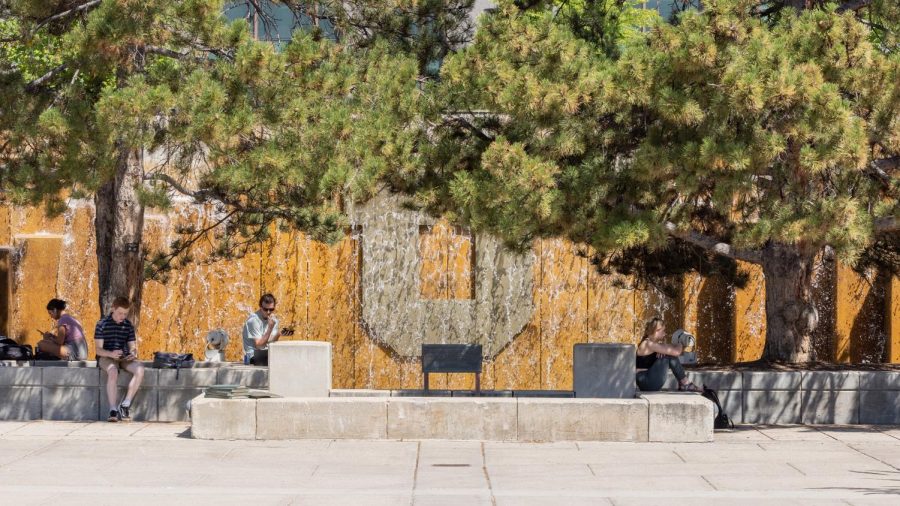 Students find some respite from the heat on the University of Utah campus outside the Marriott Library on Tuesday, Sept. 6, 2022. (Photo by Jack Gambassi | The Daily Utah Chronicle)

Utah has hit record high temperatures this year with 34 triple-digit temperature days, breaking the record of 21 days set in 1960.

Most recently, Salt Lake City was at its hottest ever, with temperatures reaching 107 degrees on Sept. 7, according to FOX 13 News.

Smitha Warrier, associate professor of anesthesiology and medical director of environmental and social sustainability at University of Utah Health, said the rising temperatures in Utah are due to human impact on climate.

“Science has been very explicit that humans are causing a significant disruption in normal climate patterns and leading to the climate change effects we’re seeing,” Warrier said.

These types of heat waves could potentially make a comeback in the near future, according to the Utah Rivers Council, with temperatures in the summer expected to rise 3.6 degrees by 2050.
Health Effects
According to Alexis Lee, director of environmental and social sustainability at University of Utah Health, these increasing temperatures are having a negative impact on the health of Utah residents, with people who don’t have access to air conditioning being hit the hardest.

“When people, especially the most vulnerable populations, are exposed to prolonged heat, they’re more likely to experience heat stress, heat stroke and sometimes even death,” Lee said. “Extreme heat is even more dangerous and deadly than other extreme weather events like hurricanes.”

While the heatwaves across Utah are causing heat-related illnesses, Lee said this increase of temperatures also has the ability to heighten conflict and violence between people.

Warrier said the surrounding environment is being affected by heat waves as well, and drought and wildfire are expected to be more common in the future.

“Water access is going to become a kind of a space of environmental justice where there’s going to be people who have access to water and others that don’t based on where they live or their socioeconomic or racial disparity,” Warrier said.

According to Lee, as climate change worsens, so will heat related illnesses, and health care providers need to be prepared to tend to these affected patients.

“We want to make sure that our future healthcare providers, our physicians, our nurses and pharmacists, our physical therapist, etc., understand the impacts of climate change on health and that they’re prepared to treat patients,” Lee said.
The Goal to be Sustainable
Over the past few years, the U has been working to lessen its effects on climate change and global warming, and is putting in effort to use more renewable energy and become more environmentally friendly.

According to Warrier, one of the ways the U is becoming more sustainable is by working on converting the lighting systems to LED, which are more energy friendly, and by changing the way the heating, ventilation and air conditioning systems are used.

“We’re working on our HVAC system to be more efficient,” Warrier said. “For example we want to make sure we are not heating and cooling at the same time to get a comfortable temperature.”

The U is also working to become a completely carbon neutral institution, Lee said, with the goal for this to happen by 2040. To do this, the U is focusing on increasing the energy efficiency of current systems and is working on using a higher percentage of electrical and renewable energy.

In 2023, a new solar farm will come online, Lee said, which will make 71% of the university’s electricity purchases come from renewable sources.

More recently, the U has started the Climate Commitment, which details the steps the institution will take to combat climate change and the deadlines it has set to do so.

According to Lee, the Climate Commitment is a great way for students to get involved in the U’s operations, and there are many other opportunities, ranging from environmental science classes to sustainability student grants for students, to make a positive impact on the community.

“If a student has an idea to do a sustainable project on campus, I would really encourage them to look at the Sustainable Campus Initiative Fund,” Lee said. “They provide seed funds for projects. So that’s one way. There are also a lot of great education programs.”

Lee also encourages students to contribute any way they can to the U’s sustainability plan, and that students’ voices are recognized and heard.

“We really are doing that work through an equity-centered lens, and we really want to make sure that the voices of people who have been historically marginalized and excluded are a part of those conversations, especially students,” Lee said.