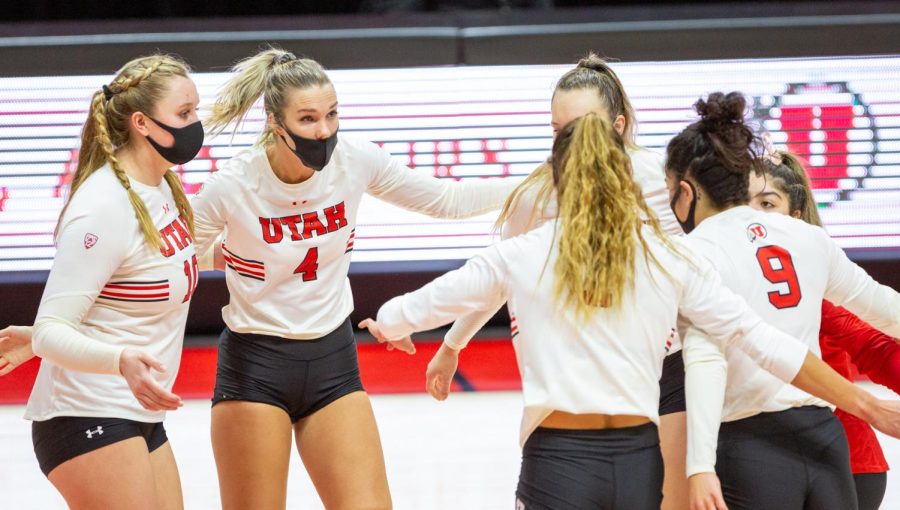 U of U Volleyball team against Colorado on Mar 21, 2021 at the Jon M. Huntsman Center on campus. (Photo by Tom Denton | The Daily Utah Chronicle)

The Utah Utes spent this past weekend in San Diego, facing off SMU on Friday and Connecticut and #12 ranked San Diego on Saturday. Here’s how the weekend went down:
Friday
In the first set against SMU, the Utes and Mustangs were going toe for toe. The Mustangs eventually managed to gain a 20-16 lead. The Utes, as resilient as ever, went on a 5-1 run to tie the set up 21-21. However, a 2-0 run from SMU gave them a set point. Sophomore Lauren Jardine was able to get a kill, but SMH then scored to earn the set victory at 25-23.

In the second set, Utah started strong to take a 15-12 lead midway through the set. Back and forth runs from each team led to a 20-17 score. Junior Allie Olsen and fifth year senior Madelyn Robinson helped get the Utes to a set point at 24-19. Another fifth year senior, Megan Yett, then earned an ace and won the set for the Utes, tying up the match at 1 apiece.

In the third set, the Utes dominated. Senior Emily Smith earned three service aces in eight points. Utah then continued to dominate, hitting 0.625 with 16 overall kills. They finished off with a comfortable score of 25-16 in the set.

To start the fourth set in which the Utes were hoping to finish off the match, they went on an 8-0 run.  Smith managed to have three service aces in the run.

The fourth set in which the Utes were hoping to finish off the match was close until the Utes pulled away with a 15-10 lead. The Mustangs buckled up though and got it very close with a 23-21 Utah lead. Jardine however then earned a kill for set point, while freshmen Ashley West and KJ Burgess ended the match with a combined block. The Utes finished the set with a 25-21 victory, winning the match against the Mustangs 3-1.
Saturday
The Utes played their second set of the weekend on Saturday against Connecticut.

The Utes came out swinging in the next set, with an 11-1 lead. They did not look back at all, as they managed to win the set with a very comfortable 25-14 final score. Burgess was the star of the set, with three total blocks.

The Utes then went into the fourth set hoping to end the match, and they succeeded once again. The Utes built up a very strong 18-11 lead, and were able to finish the set 25-18, winning the match with a 3-1 final score. Smith was incredible in the match, earning a career-high 49 assists. Jardine, West, and Burgess all had double-digit kills, helping out their team as well.

After earning a 2-0 record in their weekend so far, the Utes faced off against the 12th ranked team in the nation, San Diego. The Utes narrowly lost to #11 Purdue the week before, with a final match score of 2-3. Hoping to beat a nationally ranked team, the Utes began their last match of the weekend.

Utah managed to pull ahead of San Diego with a 14-10 lead midway through the set. Utah kept working hard to build a 17-11 lead, but San Diego played well to cut the score to 19-17. However, the Utes utilized Robinson’s six kills to finish the set 25-22, taking down the nationally ranked team in the first set to take a 1-0 match lead.

In the third set, San Diego continued to dominate with a 19-12 lead. Utah worked hard to cut the deficit to 22-18, but it was too little too late as San Diego scored three points in a row to win the set with a final score of 25-18 to take a 2-1 match lead.

The Utes, not wanting to go down without a fight, built a 9-2 lead in the fourth set. They eventually built that into a 17-9 advantage which eventually became a 25-17 victory. Redshirt sophomore Abby Karich was huge here, as she had six kills in the set, and the Utes tied it up 2-2 to force a fifth and final set to decide the winner.

The Utes and San Diego went toe-to-toe for most of the match, and Jardine and Olsen gained a block to earn a 7-6 advantage over San Diego. However, the Toreros then went on a 6-0 run to take a 12-7 lead. The Utes tried their best to fight back hard, but San Diego was simply too much for them and managed to win with a final score of 15-9, winning the match 3-2 and sending the Utes him with a 2-1 weekend record.

After two weekends in a row on the road, the Utes will return home this upcoming weekend for a four-match home stand. The Utes will face off against rival BYU on Thursday, September 15th and will battle Utah State on Friday, September 16th.