Lien: The Young Aren’t the Problem and the Old Aren’t Either 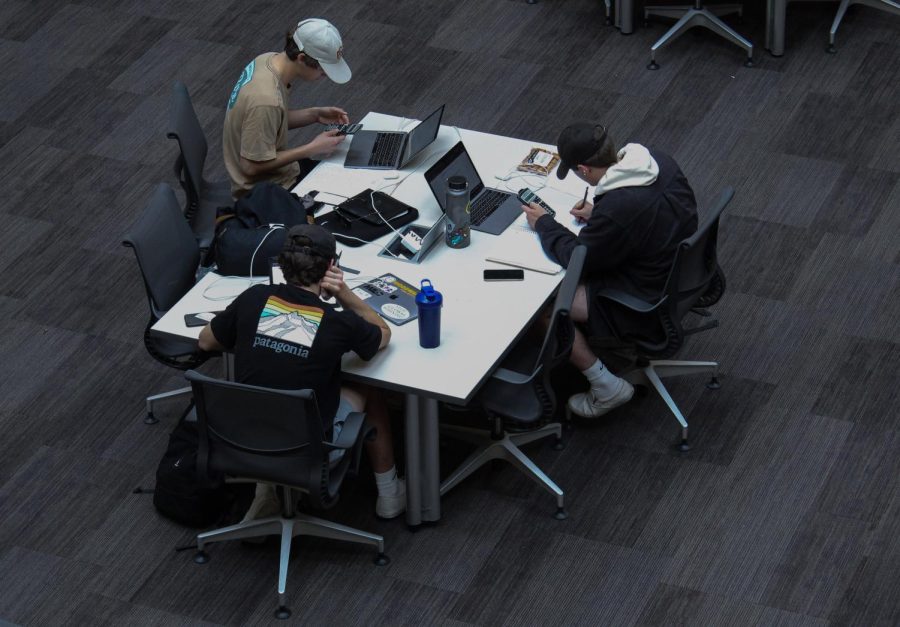 Students study at the J. Willard Marriott Library at the University of Utah Campus in Salt Lake City, on Nov. 1, 2021. (Photo by Brooklyn Critchley | The Daily Utah Chronicle)

It seems like once every new generation enters the workforce, the ones before them have something to say. “Millennials are entitled.” “Zoomers are lazy.” People have always complained about the younger generation. However, it’s important to recognize the socioeconomic and historical differences between the generations, as it helps understand our present-day actions.

We need to value generational differences because they are important in maintaining a cohesive society.
Workplace Differences
The typical rhetoric often thrown around places younger generations low on the totem pole. They don’t like working, they’re selfish, they’re killing department stores, etc. Millennials have been mocked relentlessly and their problems trivialized. Millionaires told them to lay off the avocado toast and lattes for financial success, without so much as an aside to the terrible housing market, tuition prices and inflation. According to some, younger generations are solely responsible for everything wrong in the world.

At work, Gen Z doesn’t go above and beyond, and they don’t stay longer than necessary. “Quiet quitting,” a new term meaning not taking on extra work without compensation, has made the rounds on social media. The phrase also refers to rejection of traditional workplace expectations of “climbing to the top.” Something as mundane as not stretching yourself too thin is mocked online, as if it isn’t healthy to maintain boundaries. The very term “quiet quitting” makes doing what is required like a negative.

The way communication works is different now, too. It’s not easy to keep the attention of your employees, and traditional workplaces no longer cut it. Emails that were once long and exhaustive have turned into short visuals, like videos or screen recordings. Columns tailored to baby boomer and Gen X employers have started pumping out advice on how to attract young employees. Socially and economically, Gen Z is entering the workforce at a very different time than others, and with the pandemic and social media, our values have changed. Work-life balance, fair pay and respect all influence a job’s staying power.
Why Generational Differences Exist
Gen Z was born into an age of technology, and we have adapted to working well within fast time frames, especially when it comes to learning new things and updating our knowledge. Variation in understanding technology, depending on age, is normal and expected.

Gen X and Boomers grew up without the same technologies, so the complexity of growing up chronically online isn’t a facet of their identity. That’s not to say that change isn’t possible. In fact, it’s inevitable. In light of the pandemic, digital literacy for baby boomers has risen significantly.

But each new generation’s differences stem from the way they were raised. “Prior generations were taught to repress instead of express,” causing older generations to see expression of emotions as weakness. Viewing young generations as weaker simply exists as a result of mismatch in expression. Furthermore, baby boomers could easily obtain a middle-class job without a degree, while inflation affects the younger generations disproportionately.
What We Don’t Understand
Gen Z works hard, but so does every other generation of people. We just view it differently. Gen Z has work expectations that shock older people, but it’s a good type of change — one that values employees and allows for innovative workspaces. Millennials value career progression and personal development over financial gain. They value moving up the metaphorical ladder and believe their personal drive intimidates other generations. Like Gen Z, millennials don’t believe in corporate loyalty, but they believe in an imperative work/life balance.

While younger generations complain about societal issues, they forget that older generations fought for laws we wouldn’t have today without their efforts. We didn’t protest the Vietnam War, but we’re still protesting for Black Lives Matter, Roe v. Wade and March for Our Lives.

Across time, generational animosity has persisted. The young hate the old and vice versa. Instead of having open conversations about different experiences, there’s a complete lack of understanding and we willingly ignore the lives of people unlike us.

We can learn something from our elders, just as they can learn from us. Generational differences can be useful and allow for many different perspectives on issues. Instead of tearing others down, we should strive to create a more unified society.