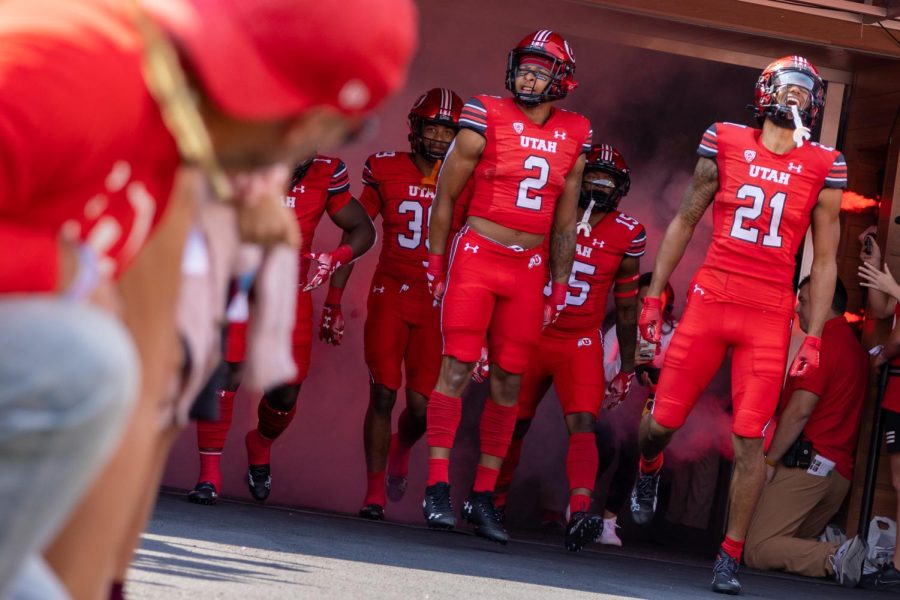 University of Utah Football walks out the tunnel in the game against Southern Utah University on Sept 10, 2022 at Rice Eccles Stadium in Salt Lake City. (Photo by Jonathan Wang | The Daily Utah Chronicle)

The University of Utah football team is taking on the San Diego State Aztecs this week in a rematch from last season. The Utes suffered a heartbreaking loss to the Aztecs a year ago and will certainly look to get some revenge for a defeat that was certainly demoralizing for Utah at the start of the 2021 campaign.

The Utes have started this season in the same spot they were in when they last faced these Aztecs — 1-1. This time, a crushing last-second defeat to Florida is the reason for the even record. They’re looking to make that 2-1 this time to finish out the non-conference schedule. These Utes are in a much better spot than last season’s team was, with a starting quarterback written in pen and loads more early season confidence.

Utah is coming off a complete demolition of Southern Utah, and while that result wasn’t unexpected, it’s still a good sign for a team rounding into form for conference play. The week-one loss to Florida was characterized as sloppy and unfortunate. The team made some mistakes that they probably shouldn’t have, which ultimately cost them the game. Despite a much weaker opponent in week two, they fixed a lot of those errors and came out with a healthy 73-7 win.

This version of the Aztecs is not the same team from a season ago, and they are projected to have a much worse season than they did last year. They’re sitting at 1-1 with a loss to Arizona and a win over Idaho State. They’ll also be on the road this time, where they’ll definitely have a tough time with a likely raucous Utah crowd. The Utes will be fired up and ready to go for this game, and with Cameron Rising under center from the opening snap, they’ll give themselves a much better chance to win.

Last season’s matchup featured Charlie Brewer as the starting quarterback in what would be his final game for the Utes. Brewer left the team following his benching in last year’s matchup with San Diego State in favor of Rising. Brewer was 14/26 on passing attempts, with an interception and no touchdowns before his benching. Rising came in for Brewer in the middle of the third quarter, tossed two scores to bring Utah back from 10-24 down, and another touchdown in overtime to keep the game going. Rising and the Utes eventually lost after a triple overtime shootout, but following the game it was abundantly clear who the Utes’ best option at quarterback was. The Bad Moon began Rising.

Brewer saw the writing on the wall and elected to leave the program, enter the transfer portal and sit out the remainder of the season. He eventually ended up at Liberty where he unfortunately broke his hand in his first start for the team.

It’s widely considered a mistake by the Utah coaching staff to have started last season with Brewer over Rising. With each passing week following the San Diego State game, Rising made that more clear, en route to an incredible 2021 season and an unquestioned starting job in 2022. This time around, Utah is much more prepared for this matchup and doesn’t anticipate any type of quarterback change, this week or any other week until Rising eventually graduates and moves on.

Utah is favored by 21 points over the Aztecs. The game kicks off at 8 p.m. MDT on Saturday, Sept. 17 for some Pac-12 after dark action.