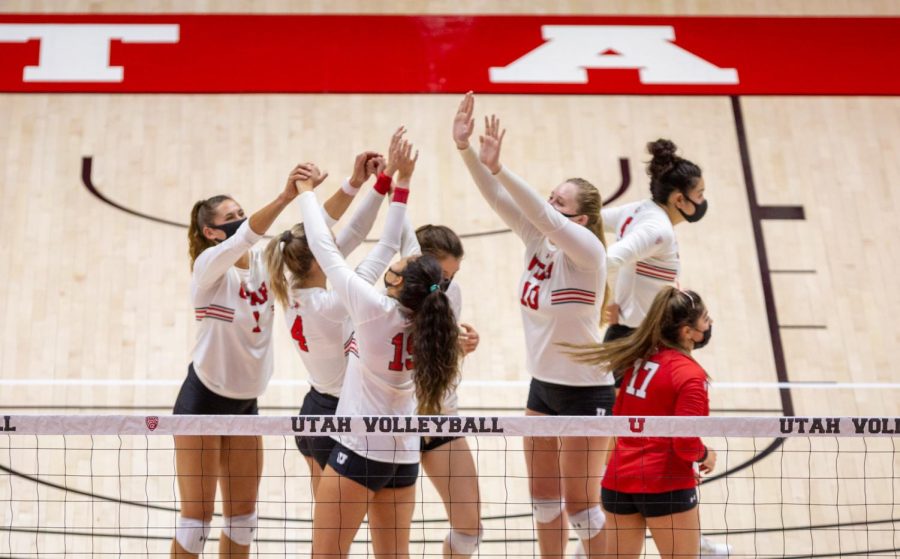 U of U Volleyball team against Colorado on Mar 21, 2021 at the Jon M. Huntsman Center on campus. (Photo by Tom Denton | The Daily Utah Chronicle)

The Utes volleyball team played BYU and Utah State this week to start off a four-match homestand going into next weekend. Here’s how the two matches played out:
Thursday
The Utes kicked off the homestand by playing their top rival, No. 15 BYU this past Thursday, Sept. 15.

To begin the first set, Utah came out firing on all cylinders, taking an extremely strong 15-8 lead. However, the Cougars countered with a 6-1 run to tighten the deficit to just 16-14. Utah built their lead to 18-15, but BYU once again countered with a 4-0 run. Freshman KJ Burgess was able to earn a kill to tie the score up, but a 6-1 run by BYU to finish up the set gave them a 25-20 finish, with a 1-0 match lead.

The Utes and Cougars started the second set off close with a 7-6 Utah lead early in the second set. Sophomore Lauren Jardine and Senior Megan Yett both had a strong set, helping rally the Utes to a 14-10 lead. Utah continued to work hard to build the lead to 18-12 over the Cougars. However, refusing to go down without a fight, the Cougars worked hard to tie the set at 22 apiece, forcing the Utes to call a timeout. However, the timeout seemed to help, as Utah then went on a 3-0 run to win the set.

The third set was very close, with the score being tied a total of 17 times throughout. Utah was able to tie the set at 14 a piece midway through after playing close. Junior Vanessa Ramirez was able to earn 10 digs to help keep the Utes in the set. The Utes were able to earn a set point later with a score of 24-22, but BYU proceeded to go on a 3-0 run to take a 25-24 lead. Junior Allie Olsen helped tie the score back up at 25-25, but errors from both teams, followed by two straight points from the Cougars gave BYU the 28-26 set victory, also giving them a 2-1 match lead.

The tightly contested 4th set saw Utah taking an 18-15 lead as Jardine was able to give the Utes 2 kills in a row with a Jardine and Olsen block to finish the 3-0 run. However, after a timeout, BYU was able to earn a 21-20 lead. Things started to look bad for the Utes as the Cougars pushed the lead to 23-21. However, Utah didn’t give up as they were able to go on a 3-1 run to tie up the score at 24-24 apiece. Sadly, BYU earned a point after the Utes committed an attack error. Jardine was not willing to give up, as she earned her 13th kill of the night to tie up the score 25-25. However, BYU finished up the set, and the match, with a 2-0 run to win the set 27-25 and earn the match victory 3-1.

“I thought that was a gritty performance by us tonight,” head coach Beth Launiere told Utah Athletics. “We faced a lot of adversity and challenges, and at one point we had three true freshmen out on the court together. Different players stepped up tonight and that has been happening all season long, which is great to see. We continue to be put in these positions and will eventually get one of these close matches to go our way as our experience continues to grow match by match. I am very proud of the effort and fight we showed tonight.”
Friday
The Utes had a chance to bounce back from their Thursday night loss on Friday when they faced another rival in Utah State. The Huntsman Center had a strong turnout, as the crowd tried to distract the Aggies whenever they would serve it, and cheered loudly as the Utes found success.

The first set started off slow for the Utes as they likely were tired after the heart-breaking loss the night before. Utah was down 13-9, but they rallied to tie up the score 14-14 midway through the set. Redshirt sophomore Abby Karich was able to earn a kill to lead off a 5-0 Utah run which eventually pushed them to a 19-17 lead. The Utes went on a 4-1 run to strengthen their lead to 23-18 over the Aggies. Freshman Ashley West was able to collect her 5th kill of the set to push the Utes to 25 points, earning a 25-20 victory. West and Jardine led the team with 5 kills each. Freshman Viktoria Wahlgren also had a highlight of her young Utah career as she earned her first career start, while also having 15 assists in the opening set.

The Utes were really able to find their groove in the second set, as they led 16-10 midway through the set. They then went on an incredible 9-0 run to secure a 25-10 victory to take a 2-0 match lead. Karich and Jardine again had strong sets, with 4 kills each. Yett also had a strong performance with three service aces.

After a tough loss the night before, the Utes focused and attempted to earn the sweep against the Aggies. They had a dominant 11-3 lead early in the set, which they continued to build upon until their lead was up to 23-13. Utah State put up a final fight, but the Utes held on to win the 3rd set at a final score of 25-18. The Utes were able to achieve the dominant sweep with a final match score of 3-0 over the rival Aggies. Burgess had 3 blocks, helping lead the Utes to an overall dominant conclusion to their weekend.

“I am proud of our response from last night to tonight’s match,” coach Launiere explained to Utah Athletics. “You never know how the team will respond and I thought we showed some maturity preparing for tonight’s match in a quick turnaround. We had a lot of great contributions once again from many players. Our team has matured and grown a lot throughout preseason play and we feel our strong schedule has prepared us well for Pac-12 play.”

After weeks of non-conference play to open up the season, the Utes finally begin facing their Pac-12 rivals next week. Colorado and Arizona will travel to Utah on Thursday and Saturday respectively. The matches will take place at the Jon M. Huntsman Center, as Utah Volleyball will look to build off of their strong finish in sweeping the Utah State Aggies.