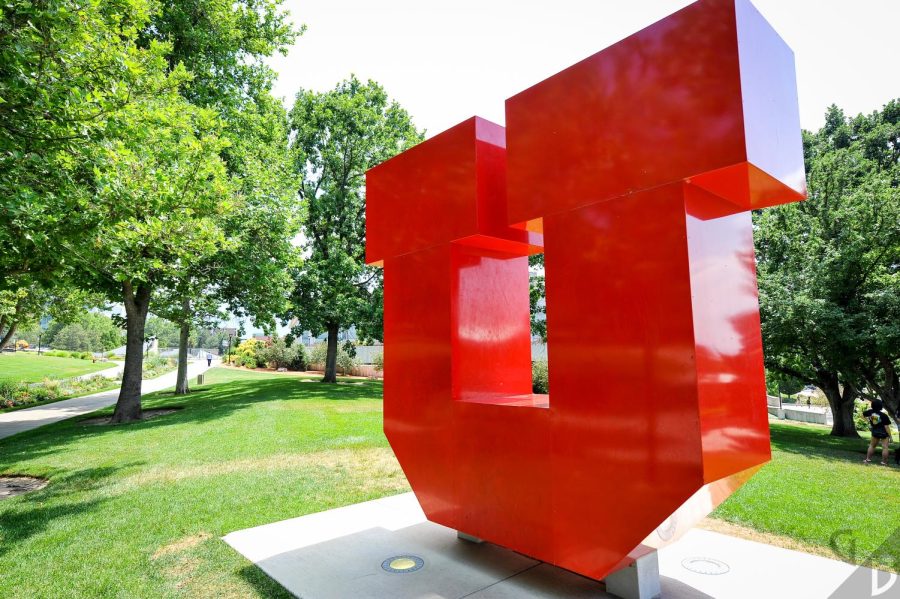 The Block U on the University of Utah Campus, Salt Lake City, Utah on July 12, 2017. (Photo by Adam Fondren | Daily Utah Chronicle)

At the beginning of every semester, U student organizations do their best to attract the attention of the student body. One of the most popular ways to do this is “tabling,” where groups and clubs set up an informational table for club representatives to pitch their organizations to interested students.

Tables always provide lots of incentives like free snacks, coupons and other souvenirs to encourage students to stop by. This helps create an enjoyable atmosphere for the hundreds of students walking on the Union lawn for the club fair.

As for the ones running the tables, attitudes are mixed.

“I like it when I actually have good conversations,” said Kelly Robbins who has been working with Intervarsity Christian Fellowship since the fall of 2019.

Robbins tabled five days in a row at the start of this semester of record-breaking heat. “We were all so tired from the heat and the sun,” she said.

Robbins also said she’s not convinced that tabling actually helps them gain that many new members. Last year, Robbins and her organization brought 300 servings of cold brew to give away at her table. Robbins said they were gone almost immediately, but it didn’t translate to increased involvement.

This year there’s no cold brew. Instead, just a sign that read, “What are you looking for in college?”

“Now people are only coming up if they’re really interested,” Robbins said.

Even though the organization was able to save money because they didn’t have to purchase a large number of caffeinated beverages for students, Robbins said there wasn’t much change in membership between this year and last year.

“Honestly, we’ve not seen that much of a difference in involvement,” Robbins said.

Lux Cutler, vice president of the U’s philosophy club, didn’t provide any food or drink at their table either. They only tabled for one day, but their club experienced a big jump in membership this semester.

In past semesters, the first few meetings for the philosophy club held 10-20 people at maximum, according to Cutler.

“I’d say we had probably thirty people in our first meeting [this semester],” Cutler said. “We didn’t have enough chairs.”

Cutler attributed that increase in membership in part to an activity that took place at the philosophy club table.

“We did this trolley problem thing, and everyone who came was very invested,” Cutler said. “You get a little paper cutout doll, and you could write the name of whoever you wanted to be on the track. I made forty little people just because I had enough paper to do that. I didn’t think they would all get used, but they did.”

While the philosophy club seemed to benefit from tabling this semester, Robbins said that there are more effective ways for Intervarsity Christian Fellowship to do its outreach.

“We pivoted over the pandemic to Instagram for most of our outreach,” Robbins said. “I think 90% of our connections come through Instagram.” Her organization also has a website and posts flyers around campus to connect with students.

After tabling this semester, Robbins questioned whether that form of outreach is still worth it.

“The ones that want to find a club are going to find it,” Robbins said. “Sometimes tabling just feels like a pointless endeavor.”