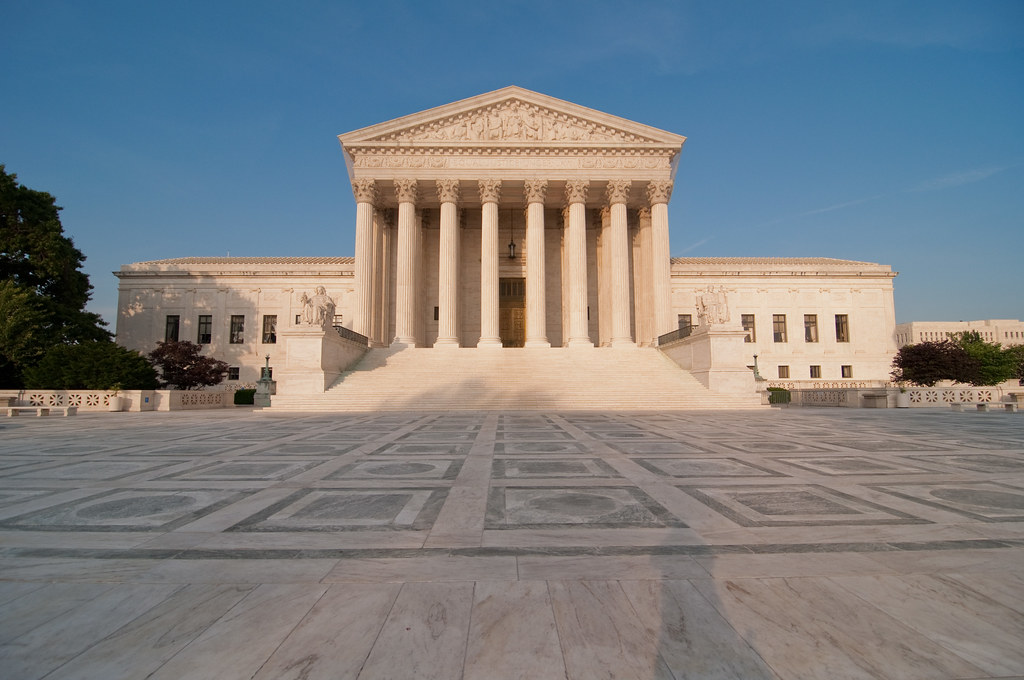 Head to Head: The Fight to Fill the Supreme Court

After the death of Justice Ruth Bader Ginsburg, Republicans and Democrats both race to fill — or create new — seats in the Court. 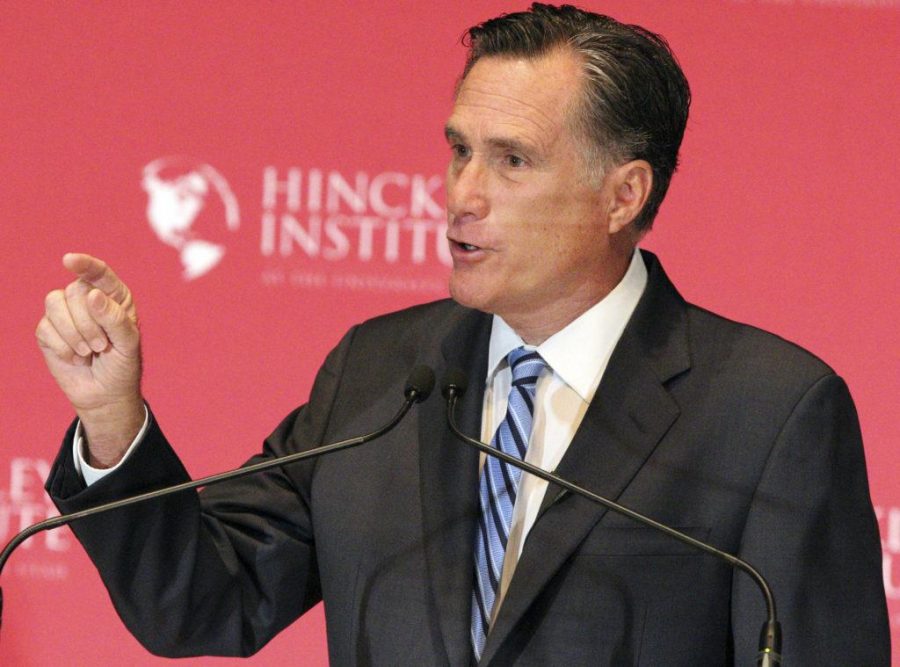 Former Massachusetts Gov. Mitt Romney gives a speech on the state of the Republican nomination for president at the University of Utah in Salt Lake City, Thursday, March, 3, 2016. (Tara Lincoln, Daily Utah Chronicle)

Supreme Court Justice Ruth Bader Ginsburg was known as a pioneer of women’s rights. Now though, for many on the left, Justice Ginsburg will also be remembered for her death in the midst of a tense presidential election, and for being replaced by a judge who could destroy much of the progress she spent her life fighting for. Justice Ginsburg is not the first justice to pass away in the midst of an election year. In 2016, Justice Antonin Scalia died unexpectedly, leaving a vacant seat on the court. In his place, President Obama nominated Merrick Garland, but Garland’s nomination was ignored by the Republican-majority Senate. Senate leaders insisted that Justice Scalia’s replacement should be chosen by the winner of that year’s presidential race. Republicans looking to maintain the legacy of the Republican party and protect American values should stand by the precedent set in 2016 and block the nomination of a Trump nominee during the 2020 election.

Senate Majority Leader Mitch McConnell defended the decision of the body to ignore Obama’s nominee by arguing that the American public deserved to be part of the decision making process. He also said that he believed it was a matter of principle and had nothing to do with who was in the Oval Office or which party they belonged to. His fellow Republican senators stood by him, with many echoing his sentiment that the American people deserved to have a say in the appointments of the justices who interpret their constitutional rights.

In 2016, conservative senators made a stand to supposedly protect the voice of the American public. Now, the death of a prominent Supreme Court justice has once again left a vacant seat on the Court in the midst of an election year. This time, however, our Republican leaders are not willing to put off Supreme Court nomination hearings to protect our voice. If the citizens of this nation deserved to have a voice in who their next Supreme Court justice would be four years ago, we deserve that same opportunity now.

A Shift In Republican Values

Republicans’ decision to disregard Obama’s nominee did not have a constitutional or historical basis or align with our founders’ intent for the judicial branch. The Supreme Court is meant to be an apolitical body that can make decisions free from partisan influence. In the Federalist Papers’ 78th essay, Alexander Hamilton argued that judicial review was a necessary function of the court, but also stressed that judges on the court should have an “independent spirit.” Our constitution, the most fundamental law of our nation, gave the president the responsibility to appoint judges so that they could maintain separation from the ever-changing whims of a Congress that holds elections every two years.

The GOP has continually defended the Founding Fathers’ original intent and the Constitution. In 2016, Republicans were willing to ignore that key party value of constitutionalism, demonstrating that they felt protecting the voice of the American people was more important than certain parts of their ideology. Republican senators who treat Amy Coney Barrett’s recent nomination differently than Garland’s in 2016 are damaging the integrity and reputation of their party by taking away an opportunity for Americans to have a voice in their government. Their actions clearly demonstrate that the goal of their party is not to protect the American people or even adhere to its own precedents but to protect and increase its power. This decision also comes from a party that advocates for First Amendment rights while allowing the president to lock away protesters with impunity and stresses the value of a small government while refusing to check a president who has continually consolidated executive power. A party that continually ignores its own values in pursuit of short-term political success is a party that lacks integrity and is not representing the American people to the best of its ability.

In 2016, Senator Dan Sullivan said that the decision to block President Obama’s Supreme Court nominee did not have anything to do with President Obama, but was a matter of principle. He wanted his constituents to have a say in who their next Supreme Court Justice was going to be, and the upcoming election afforded them the ability to do that. Many of his fellow senators reflected similar beliefs. By changing that principle now and not standing by the precedent their party set in 2016, Republicans are making the case that important precedents regarding the function of our government can be ignored by whichever party is in power. That is a sinister proposition. Our democracy should work the same regardless of which party controls the legislative and executive branches at a given time.

Republicans that blocked Obama’s nominee in 2016 should block Trump’s now. The government does not exist to be manipulated by political parties for individual power accumulation. It exists to serve the American people in a way that represents their values. The GOP leaders are using our democratic system as a tool to gain political power that lacks integrity and has not earned the votes of their constituents. 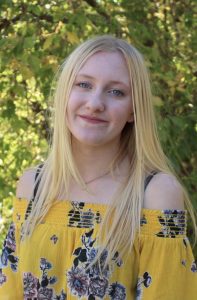 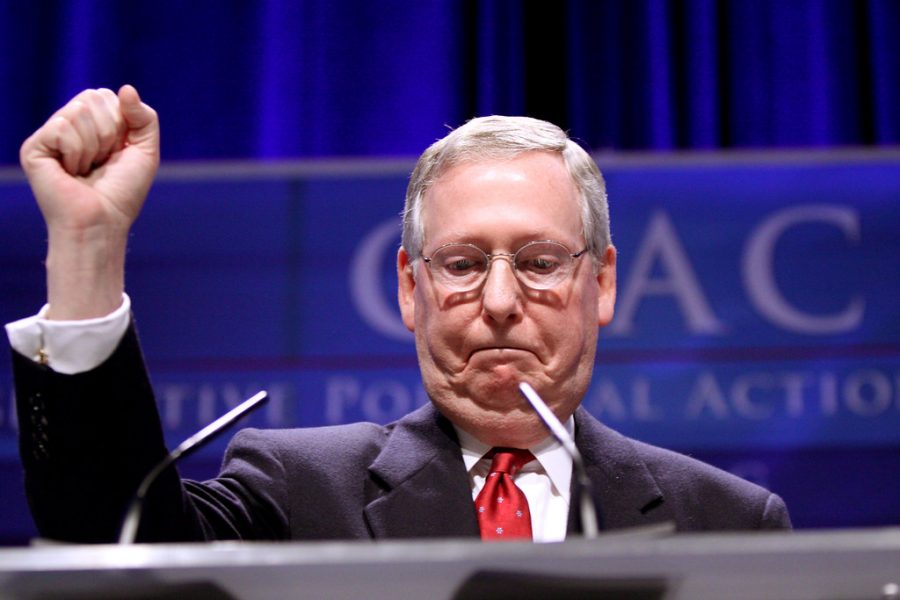 McGrath: Your Voice Matters to Republican Leaders –– Until It Doesn’t

Led by Senate Majority Leader Mitch McConnell, the vultures that are Republican officials have been watching and waiting for the next pillar of American democracy to croak and die on the side of the highway so they could swoop in to devour it. And it happened. As if this election hasn’t been chaotic and uncanny enough, Supreme Court Justice Ruth Bader Ginsburg has passed away — leaving a hole to be filled in the nation’s highest court. Hours after the Supreme Court announced her death, McConnell promised the Senate would vote on Donald Trump’s nomination. Now, Trump has the votes he needs to nominate a new justice.

Choosing the nomination for an open seat in the Supreme Court is the president’s constitutional right, but as McConnell himself said in 2016, “The American people should have a voice in the selection of their next Supreme Court Justice. Therefore, this vacancy should not be filled until we have a new president.”

After Justice Antonin Scalia’s death in early 2016, McConnell declared any appointment by then-President Obama to be null and void on the basis of it being an election year. Speaking to supporters, the Senator has reminisced, “One of my proudest moments was when I looked Barack Obama in the eye and I said, ‘Mr. President, you will not fill the Supreme Court vacancy.'” But following Justice Ginsburg’s passing just weeks before the 2020 election, McConnell has rallied his loyal troops in the Senate to appoint Trump’s new nomination. Clearly, McConnell finds it acceptable and justified to be transparently hypocritical in the name of protecting his party.

South Carolina Senator Lindsey Graham has been no less hypocritical. In 2016, he openly encouraged people to “use my words against me” when referring to his stance on appointing a new justice during the last year of a presidential term. Back then, he agreed that the American peoples’ votes should be their voice. Now, he’s changed his mind, and the GOP will support Trump’s nomination. Even Senator Mitt Romney has voted to hold confirmation hearings for Trump’s SCOTUS nominee, after voting to remove Trump from office for committing high crimes earlier this year. Apparently, he believes someone who is unfit as president due to criminal behavior should still have the power to lock in a lifetime Supreme Court justice. Got it.

In light of all this, I have to ask Republican voters — are you truly satisfied being complicit in this complete and utter hypocrisy? These leaders aren’t even attempting to hide behind political jargon. They are blatantly asking you to use their words against them and then evading the consequences of their actions. Your party’s leaders believe you and the American people should have a voice only when it benefits them.

If they confirm Trump’s nominee, there will be a 6-3 conservative majority on the court for decades. When Ginsburg passed, the election was less than 46 days away. No Supreme Court Justice has been nominated and confirmed in such a short time frame. The average time is 67 days.

Not only will citizens not have a voice in the nomination, but they also didn’t really have a voice in Trump’s election — remember, he didn’t win the popular vote in 2016. His senate coalition doesn’t reflect the popular majority, and now the Supreme Court won’t either. Why does the Republican party even pretend to listen to the “people’s voice?” For a party who claims to value life, it seems blatantly disrespectful that they didn’t even wait 24 hours after RBG’s passing to start discussing a vote on her replacement. Now, Republicans will pick apart her career like roadkill, looking to incinerate whatever legal precedents and policies they don’t like.

Trump has nominated Judge Amy Coney Barrett to replace Justice Ginsburg. It’s as if he wants us to be amazed — and more importantly, satisfied — by his choice of a woman, when this shouldn’t be an applaudable act. Regardless of gender, Barrett still has the potential to roll back abortion rights and invalidate the Affordable Care Act. For Republican leaders, Barrett’s nomination isn’t a matter of gender representation or equality — it’s about upholding legislation in their favor. Gaining control over the Supreme Court is clearly an elaborate power play to destroy the GOP’s least favorite things, Obamacare and reproductive rights.

Enhancing the court’s conservative majority will guarantee lawful privileges to the powerful and undermine legal protections for the less powerful — the working class, people of color, women and members of the LGBTQ+ community. When the Senate inevitably confirms Judge Barrett, she will not represent America’s vote or voice — she’ll be a threat to Americans’ well-being.